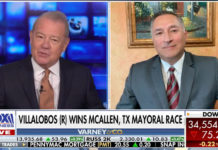 WASHINGTON – Today on the floor, U.S. Senator John Cornyn (R-TX) lamented the Vice President’s decision to visit Guatemala instead of the U.S.-Mexico border and offered to meet with her and President Biden to discuss his Bipartisan Border Solutions Act. Excerpts of Sen. Cornyn’s remarks are below, and video can be found here.

“The only problem is she’s not visiting the border. She’s not even in her home state of California, which has a border with Mexico. She’s in Guatemala.”

“Imagine calling 911 when your home is on fire and watching as they hose down your neighbor’s house instead. That’s what it feels like.”

“Former Senator Harris’ list of legislative accomplishments and her experience solving complex policy problems is not particularly deep, but rather than be critical, I’d like to offer a suggestion: In April, Senator Sinema, the Senator from Arizona, and I introduced the Bipartisan Border Solutions Act to address this unfettered flow of migration.”

“I’d be happy to offer this legislation to Vice President Harris or President Biden as a solution to the crisis on our southern border. I’m happy to meet with them.”

“Vice President Biden was tapped to solve this identical problem by President Obama. Not only was he unsuccessful, as we know it’s gotten worse since that time.”

EL TERCO Seafood restaurant picked up FREE menus from the Save...