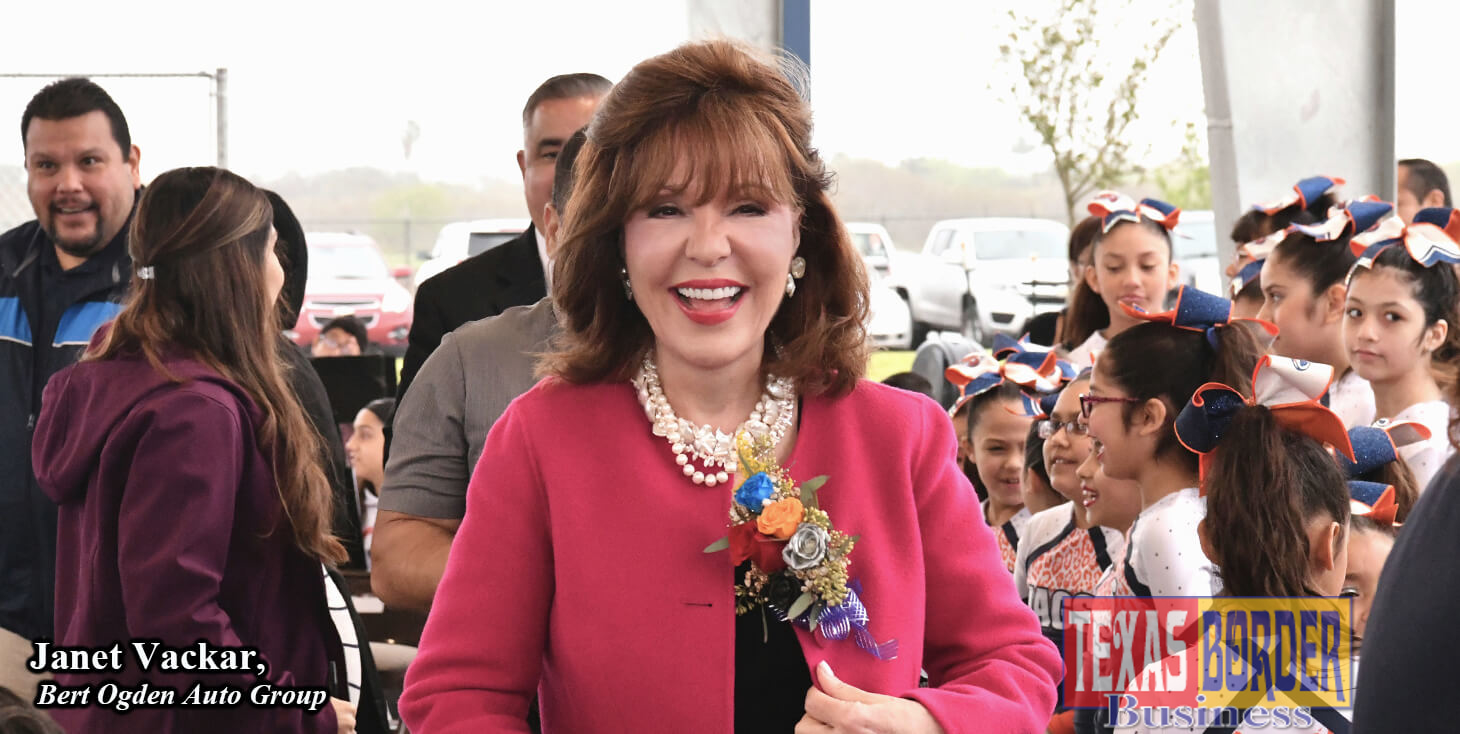 Last month was exceptional for the Vackar family. On February 22, 2019, the Edinburg school system named a park the Janet Ogden Vackar Sports Complex. It sits on a 21-acre tract of land.

“Today, we come together once again as one family to celebrate the fruition of this endeavor,” said student Giselle Rodriguez, the council president for Memorial Middle School acting as the mistress of the historic ceremony.

She said that the opening of this project will provide ample opportunities for kids to laugh and play, for students to have a sense of belonging, and for families to come together and create memories that will last a lifetime. She quoted Walt Disney as saying, “To all who come to this happy place, welcome!”

The morning was chilly and rainy, but the faces of all participants smiled and felt a sense of satisfaction because it was the grand opening and dedication of the Janet Ogden Vackar Sports Complex.

This park means a lot in many ways for many people; its creation is visionary. For Janet it is an honor, for the children of the 21st century, it is their heritage. For school and city leaders, it means the satisfaction of making a reality the harmonious balance of education and health. In simple words, it is a beautiful park.

The Vackar family owns the Bert Ogden Auto Group. It is the largest conglomerate of dealerships that serve the Rio Grande Valley.  The company was initially started in Edinburg by Janet’s father, Bert Ogden. Bob and Janet Vackar continued with the business and made it bigger.

The company, as large as it is, has given hundreds of job opportunities to the local communities. And they always continue in search of talented individuals to be part of their company.

The “Dale Gas” slogan, has made Janet a recognizable icon in the market. However, their philanthropic activities is challenging to follow, that is why Bob, Janet and the Bert Ogden Auto Group are equal to none.

During the ceremony, it was said, that over the years, Janet has dedicated her time to noble causes helping children in need. Her deep love and enthusiasm for empowering children are evident in every endeavor. This love for children was recognized early on as she volunteered as a teenager at the YMCA and had a particular fondness for helping a child with cerebral palsy. She has never stopped since, from sponsoring carnivals for to inspiring and organizing the kids from schools across the Valley; and delivering gifts at schools and Children’s Hospitals.

She also takes part in significant fundraising events through decades-long support of the Easter Seals foundation and her recent appointment to the board of the Vannie E. Cook Jr. Cancer Foundation.

Janet’s youthful spirit and love of children is always on display and she looks for the opportunity to act for the children of customers and staff. It always brings a smile to your face.

David Torres, the City of Edinburg Mayor Pro-Tem, said, “I’m proud to say that I’m a former school board member and I was advised by our superintendent when this was just a baby project.”He continued, “So, I am proud to say that I have been a part of this from the beginning to the end.”

The ceremony took place on the grounds of the park. Torres said that it was good to see many students taking part in the celebration and the official opening of the complex. “The Janet Ogden Vackar Sports Complex project has been a topic of conversation for years; I am glad to see it become a reality.”

The dedication was conducted in its entirety by children of the Edinburg Consolidated Independent School District. Boy, they did a great job! The mistress of the ceremony called Janet Ogden Vackar to the podium. Janet said, “Thank you so much. This is wonderful. My sister would play the flute in the band, and I was a cheerleader through school, so this is so dear to my heart.” Bob, her husband, also attended the ceremony and mingled with everyone; he is very supportive. and enjoys around people.

As Janet was saying to the children, “Some of you weren’t even born when I started saying ‘Dale Gas,’ but I want to tell you a little story.” She said, “My Dad always said it in the dealership; the first one he had, which was in Edinburg. It was just common that my Dad said, ‘Dale Gas’ in the back of the dealership. And so, when my parents passed away in 1992, it was kind of my way of remembering them.”

She said that it’s been thirty-six years since she has been saying it, but she remembers that her mom always told her, “Janet you’ve got to be a woman of substance not just out there.” That’s all it took for her to understand that working with the community is essential.

“I wanted to be with children because some of them don’t have that at home. And some of them are not encouraged, but I know that at schools and social activities, I wanted them to feel comfortable.” She said, “I grew up here. I didn’t make the best grades, but I stayed strong, and I went to school, and it felt good because I was confident. So, I teach children that you can be anything that you desire to be. Just keep going forward. All the mistakes, all the trials, the everything I have been through; just remember when it comes up, it’s because there’s a reason. We learn from our lessons, and I’m stronger than ever.”

Mr. Robert Peña, Jr., the Edinburg ISD School Board President first thanked the children that were taking part in the celebration and went on to congratulate Mr. and Mrs. Vackar for such an honor vested in them.

Peña said that Janet’s comments were humble. He noted that the Ogden family and the Vackar family are extended well-known families of Edinburg that he can recall.

“In fact, prior to the event I had the good pleasure of standing here with Mr. Vackar and talking about how as a youngster I would go to Vackar Lumber and Supply Company on Cano and 13th and 14th streets and go pick out lumber items with my dad or hardware supplies that we needed at home.” He continued, “I recall running through the store.”

He also pointed out that the Vackar family was very committed to this community with their participation in community service.

Peña also added that as a youngster driving south on 281 when it used to be a divided highway with palm trees in the middle, the dealership was on the south side.

“I recall my father needed to go purchase a vehicle and we bought our first Chevrolet Impala there at Bert Ogden dealership.”

He said that the Ogden family was there and received them with open arms as they do now. “So, thank you for always doing so,” Peña said.

As the ceremony continued, Janet said that she felt young at heart and wanted to share that love. “This is the greatest honor I have ever been presented besides our daughter being born, and to be alive and enjoy this honor.”  She continued, “And to know that kids one day will ask who was that? Well, it wasn’t just the ‘Dale Gas’ lady, she really cared, and I wanted to instill that in you today. And I mean it.”

Many kids were participating, that is why Janet took the opportunity to direct her comments to them. Just to give you an idea, there was music by the Memorial Band, the Cheers by the Eisenhower Cheer and the Dancers by the Memorial Middle School Drill Team. So, it was like a big fiesta led by children.

And that is not all, the Mistress of Ceremony was Giselle Rodriguez, the MMS Student Council President, the introduction of guests was by Larissa Lopez of the Eisenhower Student Council, the Presentation of Colors by JROTC – JEHS, the U.S. Pledge of Allegiance led by MMS student. Also, the Texas Pledge of Allegiance by Natalie Serna an Eisenhower Student and the Invocation by Giselle Lara from Eisenhower school. They did a great job of welcoming Janet and by being part of this once-in-a-lifetime dedication.

Janet said, “I really do care that families and children will be here. Children with disabilities will be here, and everyone will come together as a community which you’ve always done for my family and me.” She continued, “Edinburg was the first place my dad started. You have been kind to me and supported me all these years. I thank you from the bottom of my heart. I will never forget. I’m overwhelmed, thank you so much,” she finalized.

Dr. Rene Gutierrez – Superintendent of the Edinburg ISD said “Mr. and Mrs. Vackar, thank you for being role models and pillars in our community. Naming this park was an honor for us, an easy decision to name it the Janet Vackar Sports Complex. All the kids and the families in this community will enjoy the park for years to come. All I can say kids will be playing baseball, skating, softball, perhaps playing basketball or soccer. The adults will be walking around the trail about a mile long or jogging. It will be an improvement in the quality of life. This park is open year-round every single day. So, make it a point to bring in the kids, the families, everyone is invited to come and enjoy.” He closed with “Dale Gas.”

Written by Roberto Hugo Gonzalez, the 2009 SBA Journalist of the Year Award Winner & the 2009 and 2012 Paul Harris Fellow Award recipient.

Edinburg ISD has always been a highly innovative school district that has excelled in academics, athletics, career, technology, and fine arts. The school district has six National Blue-Ribbon campuses and is recognized as an eighth district in this year’s state accountability report. Through the efforts of our school board, the impossible has been made possible, and helped students reach incredible heights; this is why Edinburg ISD is the place to be.

AG Paxton: Settlement Agreement Against Tobacco Companies Must Be Enforced