Moved by some of the stories of courage emanating from Hidalgo County, Cher reached out to emergency management officials in California where she lives and said she wanted to help.
Read more
MeGustaTV

Hundreds of families were in attendance for this free festival which included food, water slides, wrestling, and performances by Buck N Crazy Band, Joe V. & Midnight Run, and Mikey Jay. Special guest Texas State Senator Eddie Lucio, Jr. was in attendance and presented City of San Juan officials with a proclamation in honor of the annual festival, a Texas flag, as well as an official state gavel used during state public meetings to Mayor Mario Garza. In return, city officials presented Senator Lucio with a key to the city to commemorate the occasion. 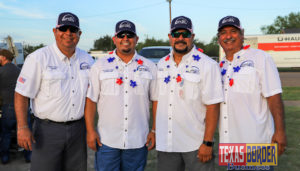 “We want to thank all city employees, workers, sponsors and volunteers who contributed to the success of this event,” said Mayor Mario Garza. “We hope all attendees enjoyed the festivities as we celebrated the freedom and liberties that we enjoy as Americans,” he added.

Governor Greg Abbott today provided an update on the state's response to the presence of Naeglera Fowleri, a deadly ameba, in the City of Lake Jackson's water supply.
Read more
Border Patrol at the Texas Border

Governor Greg Abbott today provided an update on the state's response to the presence of Naeglera Fowleri, a deadly ameba, in the City of Lake Jackson's water supply.
Read more

U.S. Sen. Ted Cruz (R-Texas) today sent a second letter to Centers for Disease Control and Prevention Director Robert Redfield requestingadditional data on the coronavirus and answers to help clarify areas in which disinformation and confusion have occurred since the pandemic began.
Read more

Commercial Driver’s Licenses (CDLs) will be revoked if convicted of human...

Help your child face challenging questions about inequality with ‘An Ox...