Home News Exclusives The Unfolding Transformation of a City 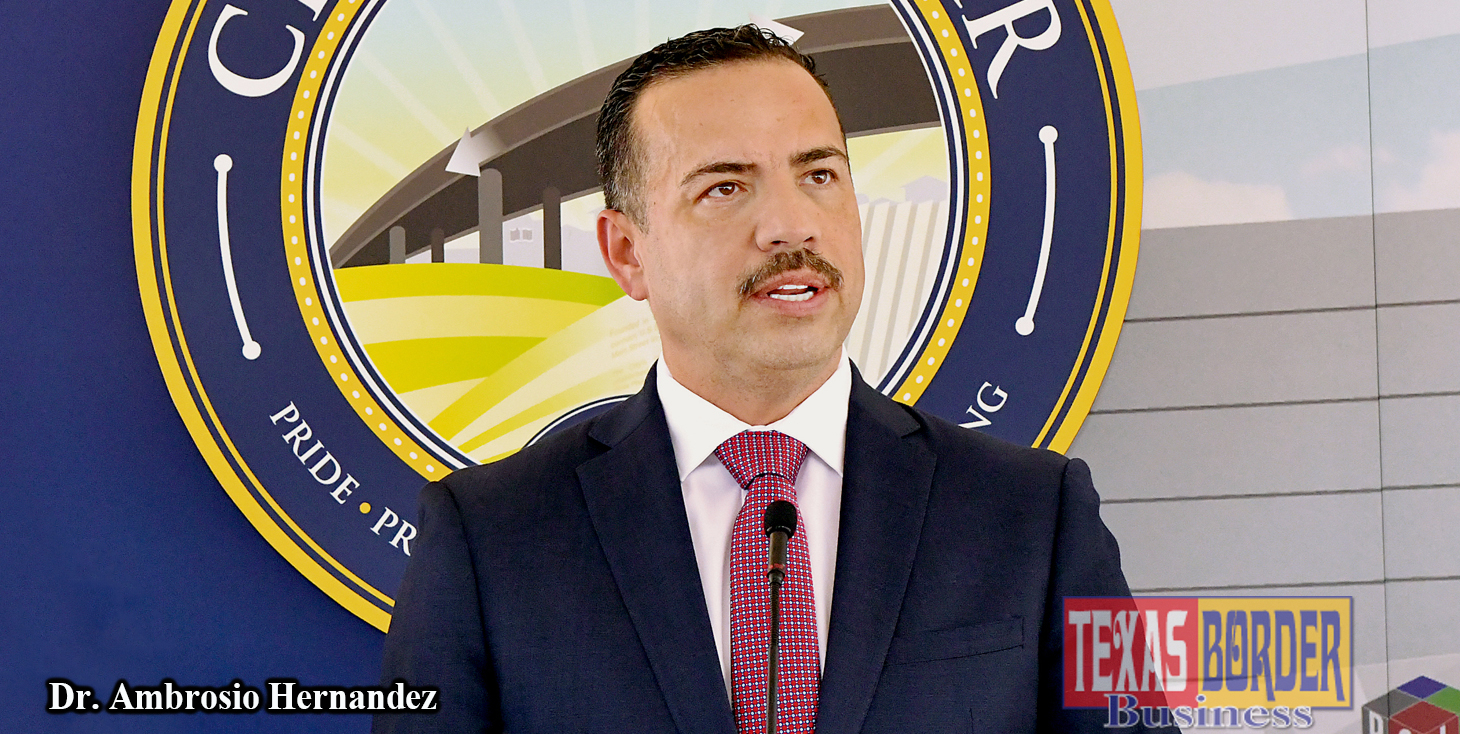 “Our Legacy – an Innovative and Educational Facility to Serve for Future Generations” – Mayor Ambrosio Hernandez, M.D.

Great things are happening in South Texas. Since 2015, the City of Pharr has emerged as a leading city announcing outstanding projects for the general public and community residents. Last month, the long-awaited groundbreaking ceremony for a Natatorium took place, to which distinguished leaders and professionals of the region attended.

According to the estimated 2019 census, Pharr has experienced a growth in its population to about 80,000. In the last five years, this community has seen unprecedented growth in the full spectrum of providing more amenities. City fathers, under the leadership of Mayor Ambrosio “Amos” Hernandez, MD, continue to set the pace for innovative collaborations in the fields of technology, education, and medicine.

The Natatorium is a prime example of a three-way commitment to sharing costs while seeking a shared goal. This partnership was in coordination with the University of Texas Rio Grande Valley and the Pharr-San Juan-Alamo Independent School District. It is an example of how great things get accomplished when multiple entities put aside territorial tendencies and come together to deliver for the greater good.

Mayor Hernandez said that he has enjoyed being mayor, and the Natatorium project is the product of a well-coordinated team effort. “This is not just a swimming pool. This is access to academic opportunities that the Pharr-San Juan-Alamo ISD wants to do with their students.” He said, “They’ll be able to say, “You know what? If you come to PSJA, we have our academy’s premier site, and you get to rotate with the University of Texas Rio Grande Valley.”

UTRGV president, Dr. Guy Bayley was also present said that it was a fantastic day in history. “It’s another red-letter day, and it wouldn’t be possible at all without the partnerships and the leadership and your leadership, Mayor Hernandez.”

Dr. Bailey said that he sees this as a potential future site for swimming and diving. “Think about it – this is an Olympic-size pool with a diving facility.” He continued, “We will be able to do things here that we could never do in any other way.” He pointed out that the Natatorium project will open up possibilities that never existed before and that it was truly an important day for UTRGV.

Rebecca Arizmendi, president of the Pharr Chamber of Commerce and the MC for the event said, “The PSJA School District was a significant part of this collaboration. This could not have been possible without the participation of Dr. Daniel King, the superintendent.”

Dr. King, at one point, said that he was going to pinch himself to find out if they were finally at the end of breaking ground. He pointed out that for two and a half years, the partners of the project had been doing everything fromtalking, planning, and thinking, to ultimately designing, redesigning, re-talking, and re-planning. “I guess we’re finally here, right?”

Everyone in the partnership group agreed that putting something together like this is a complicated matter. Dr. King said that the outcome would be a game-changer for the City of Pharr, for the school district, for UTRGV, and the Valley.

“This will be an incredible Olympic NCAA pool. There are probably no facilities like this south of Austin,” he said.

The Natatorium is a recreational facility for the community that offers alternatives for people to stay away from screens; to get people physically moving, and into educational facilities for students, and into competitive swimming programs.

The Natatorium is also available for the university to have full-fledged NCAA swimming in a first-class facility. It is an excellent opportunity for residents and the Valley to host some of the biggest meets available in the state, whether they be community recreational, tech leagues, and summer leagues. It was also said that the facility’s capacity is for seating a thousand people.

The design and the planning of this facility went beyond just thinking outside of the box. It brings, for the first time, the presence of a university to the Pharr, San Juan, Alamo area. The architect in charge is Laura Warren of the Warren Group.

The Natatorium will be of great benefit for Pharr, San Juan, and Alamo, with a combined population of approximately 134,000. The facility is available to everyone in the region.

The PSJA school board President, Jesse Zambrano, said that the City of Pharr and the tri-city area are becoming a college and university town. “This is probably the biggest thing about it for me. I would venture to say that no one entity could put something like this together by themselves.” He said, “the creation of this facility is giving the community an outstanding aquatic facility, with university medical facilities right next door. This is the most unique combination, surely, south of Austin.”

Dr. John H. Krause, Dean of UTRGV School of Medicine, recognized the support that Mayor Hernandez has provided to the university. He said that for their part, they would be building the sports medicine complex on the same site.

He added, “That complex will provide full-service care for athletes from all over the Valley, and will have orthopedic surgeons, medical doctors, and physical therapists. It will also be utilized as a clinical facility and as a training facility, as we continue to have these health professions at UTRGV.” He pointed out that all of this is in partnership with the City of Pharr.

For the next year, the university has plans to build a nursing school, a pharmacy school, and a clinical facility just down the road all in Pharr. Dr. Krause said, “This is just the beginning of a long-term relationship, and we value this relationship.”

Texas State Representative Sergio Muñoz said, “For us as a state, working with our school districts and UTRGV, it’s all about creating opportunities. And as you change one person, one child, and a family, you’re able to change a generation.” He continued, “We strive to do that not only on the state but working with our partners like Mayor Hernandez to bring those opportunities to our families.”

PSJA ISD Board Member Carlos G. Villegas, Jr. recognized Mayor Hernandez for planting the seed. Also, for always helping the 32,000 kids in 46 campuses. You’re always striving for the best.” Villegas also reminded everyone that this project brings an unprecedented economic to Pharr and the region.

Rick Pedraza, the PSJA ISD Board Asst. Secretary-Treasurer and the City of Pharr Public Works Director said, “Let’s celebrate our tri-city heritage which has hit its 100th anniversary. Also, to continue working together as a family to raise the quality of life and education in our region.”

George Palacios, the vice president for the PSJA School Board said, “Everybody traveling on this expressway is going to see the Natatorium, and they’re going to say, ‘Man, I wish we had something like that in our town’.”

Dr. Bailey also mentioned that the partnership between the City of Pharr and the University has been just unimaginably energetic and creative. “Mayor, we thank you for your leadership. We appreciate the council and PSJA ISD for everything you’ve done. We’re delighted and honored to be a part of this.”

Pharr is leading in many aspects. Concerning technology, it will host a groundbreaking on Tuesday, October 8, 2019, for the City of Pharr Communications center. This is a state-of-the-art facility that will showcase Pharr’s partnership with local first responder agencies through the dispatching of 911 calls from neighboring communities.

The City is also working hand in hand with Doctors Hospital at Renaissance in the area of developing cost-effective services. They are also reinforcing the need for the residents to be making good choices in nutrition for healthy living.

The City of Pharr’s new Natatorium location will be on the Northwest corner of Sioux Road and 281 in Pharr.

Written by Roberto Hugo Gonzalez, the 2009 SBA Journalist of the Year and a 2009 and 2012 Paul Harris Fellow Award recipient.

County approves $7.5 million of CARES Act Funds for the Mortgage...

DHR Health has the only Certified Urgent Cares in the Rio...