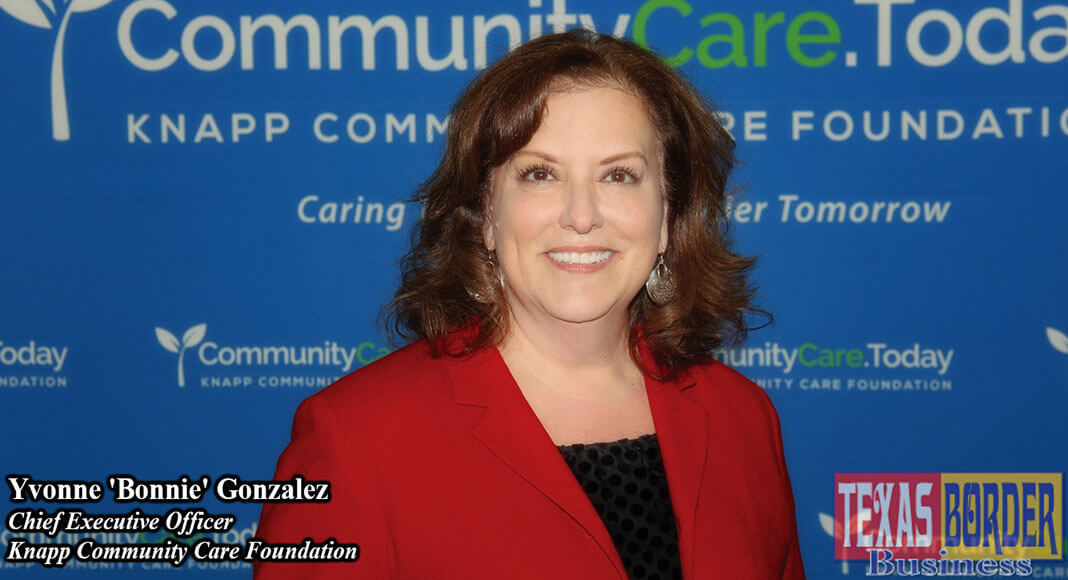 It is reassuring to know that someone and a board of directors work diligently to better the health of the Rio Grande Valley residents. Other communities don’t have organizations that provide essential resources and shared with deserving nonprofits entities.

Yvonne Gonzales, better known as Bonnie, is the Chief Executive Officer of Knapp Community Care Foundation (KCCF). She describes KCCF as a health conversion foundation created in late November of 2012.

In November of 2013, Bonnie was hired to head the foundation and works closely with eleven board members. “The board is a phenomenal group of people, all from the mid-Valley,” she told Texas Border Business.

They invest their money precisely in the Mid-Valley. The coverage parameters are a sizeable territorial area that goes from South Progreso to the US/Mexican border. To the north, they serve Willacy County and to the east, La Feria, and anything in between.

“So, when we provide grants, it is for services within those communities,” Bonnie said.

She explained that as a legacy foundation, they are ruled by their bylaws and can only invest in health-related activities in the Mid Valley. She noted that the board is interested in what they call upstream, meaning prevention and wellness, encouraging people to be healthy and involved in a health-related activity.

Since inception, this foundation connected with nonprofits, South Texas leaders, and recently with the University of Texas Rio Grande Valley (UTRGV). The relationships helped them to learn more about the real health problems that the community suffers. Today, they focus on diabetes and obesity prevention, which is a considerable concern. “No one in the Valley should be surprised about the health problems of the area,” she said.

Bonnie pointed out that one in every three individuals has diabetes, the second of that third group is prediabetic and doesn’t know it.

“In my family, my mother, many of my mother’s brothers and sisters, had diabetes.” She said, “In my case, I am not, and I thank the Lord for that.” She added that she works not to develop diabetes.

So, in a few words, this is the focus and the essence of the foundation.

“It is something that we as a foundation take very seriously,” she said.

Bonnie mentioned that their mission is a long-term investment. For the last four years, they have followed their strategic plan to fund projects that fight against diabetes and obesity.

“Diabetes and obesity are generational diseases and a real concern for all of us in the Rio Grande Valley,” she said.

She emphasized that long-term investment is essential for the foundation; they don’t anticipate change overnight.

According to her, they have made suitable investments, one of them in genomic research with the South Texas Diabetes and Obesity Institute, also with the Boys and Girls Clubs and the South Texas Juvenile Diabetes Association. Valley Nature Center even has gotten funding from Knapp Community Care Foundation.

But it does not stop there; they also fund educational programs and hike and bike trails. “All kinds of projects related to the prevention of diabetes and obesity,” Bonnie stated.

The foundation is a 501c3 private foundation as per IRS rules; they can only grant money to nonprofits, governmental entities, and entities in good standing with the IRS. They also have to be a 501c3 entity; that’s how they engage.

The nonprofit organizations have the freedom to request grant funding for their projects, as long as they provide services in the Knapp Community Care Foundation footprint. Projects have to be approved by the foundation board and coincide with their strategic plan in place.

Bonnie said that they recently funded Prevent Blindness, a nonprofit from Austin, Texas, which brought their services to the Mid-Valley. According to her, it is not uncommon for the foundation to fund state of national nonprofits, the rule always applies, if they are funded, all services should be provided in the Mid Valley area.

Bonnie stated that the process of applying for a grant with KCCF is a lot simpler if compared with federal grant applications, but it still is a process with requirements that have to be met as stipulated.

She emphasized that the foundation has a mission and a vision and a process of selection. When the foundation is ready to fund or how they call it NOFA, a notice of funding availability, they use a contact list of hundreds of nonprofit organizations, letting them know that the window is open for them to submit their proposals.

Often, they get unsolicited grants, which they also welcome. However, nonprofits need to know to connect with the foundation first.

“Mel Escamilla is the Grant Director of the foundation, and I encouraged any nonprofit to come forward and present ideas for funding.

Since its creation, KCCF has committed over $31MM for prevention and wellness, direct health services, health-related education, and behavioral health. Gonzalez recognizes that this can only be achieved by creating relationships with partners who aim to make holistic and sustainable change in our communities.

Bonnie was born to Guadalupe and Elia Muñoz, “my wonderful parents’ as she calls them. In life, both were public school educators.

“I always tell Nick my incredible husband of soon to be 44 years that my can-do attitude. My attitude of nothing is impossible, came from my parents.”

Bonnie is a nurse by training, graduated from UT Austin. She told Texas Border Business, “I’ll never forget one afternoon calling my mother just so tired and saying, I can’t do this. It’s too hard. I’m taking organic chemistry, biology, anatomy, and physiology, and I’m exhausted.”

On the other side of the phone line, her mother said to her, “Have I ever known you to quit? have you ever quit anything?” Bonnie’s response to her mom, “Absolutely not.” And her mom said, “and you will not start now.”

Bonnie pointed out that her mother and father instilled in them this passion for learning, this passion for always doing better, and, more importantly, for others who cannot do for themselves.

“I am blessed, honestly, have been blessed to have wonderful parents. They are no longer here, and I missed them terribly.”

Gonzalez received a bachelor’s in nursing from the University of Texas at Austin, and a master’s in public administration from the Kennedy School of Government at Harvard University. Gonzalez is married to Nick and has two daughters, Vanessa and Marissa.

Before coming to KCCF, Gonzalez led Workforce Solutions, Lower Rio, as Chief Executive Officer for ten years. In that role, Gonzalez created strategic partnerships with the private and public sectors to help people to work.

Under her direction, Workforce Solutions was named the “Top Performing Workforce Board in the State of Texas” and received state and national recognition. Before her time at WFS, she was the founding CEO of the Rio Grande Valley Empowerment Zone Corporation.

During her 8-year tenure, she led an initiative that leveraged $414MM in state, federal, and private investments to the original $40MM federal investment. That investment resulted in infrastructure, housing, business, and economic development programs.

Gonzalez has been involved in public and higher education, community economic development, health care, and public nonprofit work throughout her career. She is currently on the board for several organizations; Philanthropy Southwest and is an advisory board member for Western Governor’s University –Texas and Federal Reserve Bank of Dallas.

Texas Border Business recognizes and salutes Bonnie Gonzalez’s mission and vision, and as a professional that cares. Together with a dedicated, compassionate board of directors’ work to bring awareness and prevention of two formidable enemies, diabetes and obesity.