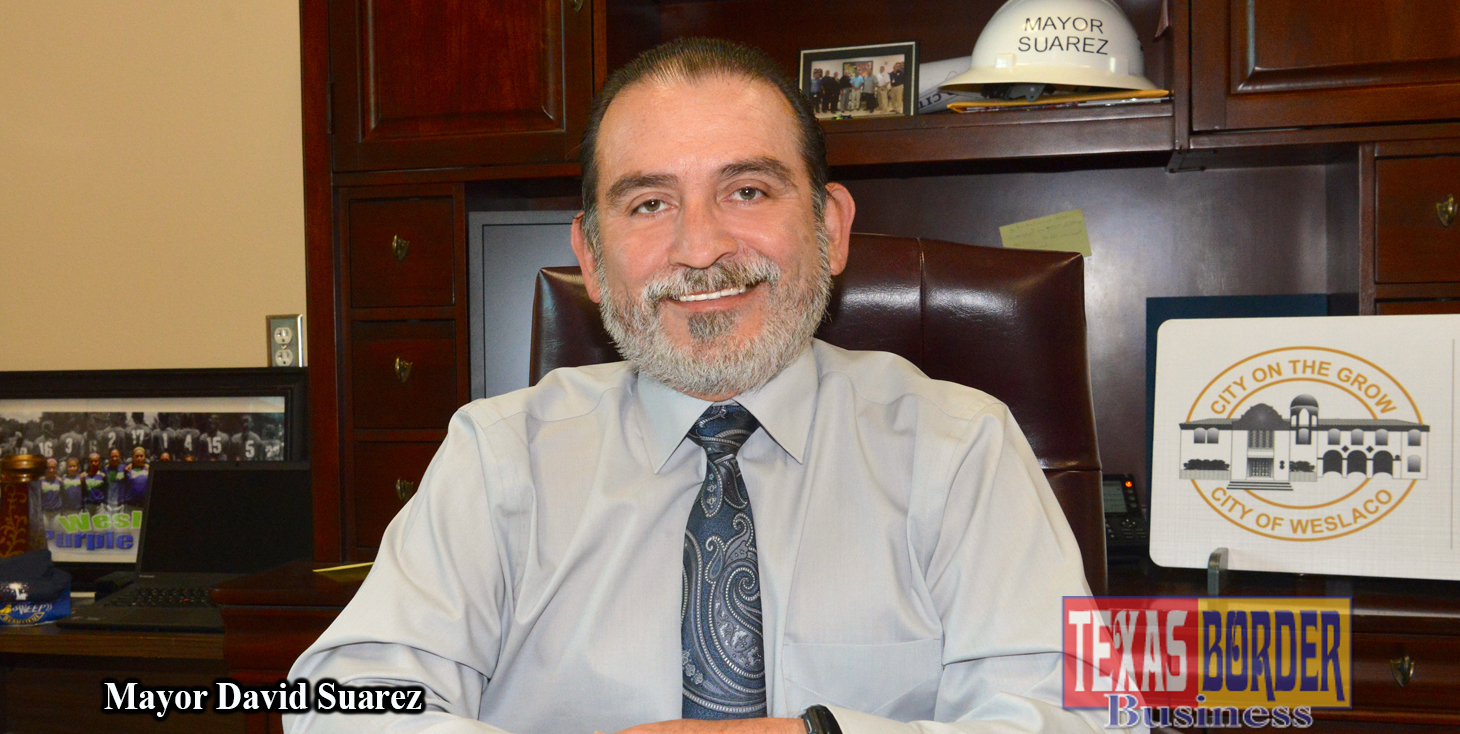 This year, the residents of the City of Weslaco celebrated its One-Hundredth Anniversary. It is a growing community that has achieved a success that is an example of its resilient community.

It was 1919 when Weslaco was born. The city’s name derived from the W.E. Stewart Land Company. However, it dates back to 1790 when it was part of the Llano Grande Spanish land grant to Juan José Ynojosa de Ballí.

Weslaco has a rich and exciting history. It was the hometown of Harlon Block, one of the Marines photographed raising the flag at Iwo Jima, and of film and television actor David Spielberg. And today, the hometown of David Suarez, the current mayor of Weslaco, Texas.

Precisely in 1921, through a municipal ordinance which declared that land north of the tracks be reserved for Hispanic residences and businesses, and land south of the tracks be reserved for “Anglo” residences and businesses. Who would have ever known, or even predict that a resident of the labor camp was going to become Weslaco’s Mayor 46 years after the city’s inception?

At that time, the labor camps were located at 1800 North Texas Boulevard, outside the city limits back then. According to Mayor Suarez, they were surrounded by agricultural land. Things have changed, today, those differences are outdated, and that is what has made Weslaco unique.

David Suarez was born in 1965 and has enjoyed serving the city as mayor since 2013.  He told Texas Border Business that Weslaco has grown by leaps and bounds. “I think Weslaco has a lot of potential for growth.”

Mayor Suarez remembers that he used to play on the agricultural ground where today, Walmart and HEB are located. “Weslaco’s growth has been tremendous,” he said. “The city limits have gone all the way up to Mile 10, and Mile 11 in some areas.”

He believes that Weslaco is located strategically right in the middle of the Rio Grande Valley; it is precisely this that allows for more growth. He said, “The Extra-Territorial Jurisdiction (ETJ) boundaries are set with our friends in Mercedes, in Donna, the Delta area, and Progreso; the lines have been drawn, so the growth is going to be within that area.”

Mayor Suarez pointed out that as you travel on I-2 or Expressway 83, there’s still plenty of room for growth on the Expressway.

Besides, he said, “As Weslaco grows, the surrounding cities will get some experience and grow along with Weslaco.” The city has approximately 45,000 residents. Mayor Suarez said, “We will find out soon when the Census reports are out.”

He said that what makes Weslaco active and unique are its residents. “Weslaco’s biggest asset is its people and it is no longer a bedroom community.” Mayor Suarez cited a study prepared by the local university which says that 14,000 people come to Weslaco to work and 7,000 go out to work.

“We have residents in Weslaco who work elsewhere, but they come back home. So, we have a net increase of 7,000 people daily in Weslaco.”

He also said that the city has been working aggressively in attracting industry for the creation of job opportunities. “We just had a workshop with the Economic Development team to buy more land, where the EDC plans are to expand our industrial park.” He said, “We need to buy more land to the north and south so we can land manufacturing companies.”

Marketing the City and EDC use to attract companies is the quality of life that Weslaco offers. The fact that the city is growing, has excellent schools, churches, and parks to offer; it is also under the leadership of a stable government. “We try to let the numbers speak for themselves,” he said.

Mayor Suarez said that Weslaco is always interested in attracting new retail and eateries, however, one of the primary interests is to attract manufacturing. “We have an industrial park that is well located, and also we have the General Aviation Airport that we promote to create more traffic.” He said, “We’re making strides there, but we’re not where we need to be.”

Just recently, he said, Kapal Cabinet House moved to Weslaco and took over an 80,000 sq. ft. building that used to house Dickie’s. “I had the privilege of touring that plant a couple of weeks ago, and what they’re doing there is just phenomenal and great for Weslaco.”

“We incentivize those types of businesses because they give back to the community in employment and tax dollars. So, the money’s circulating, and it helps the small businesspeople, and the downtown merchants to survive.”

Mayor Suarez said that the EDC has a program called ‘Weslaco 100’; it helps merchants work on their building facades. “Some of those buildings are historic.” He also pointed out that the Weslaco Chamber of Commerce does a great job promoting downtown.

Aside from historic commercial businesses, Weslaco has the old Cortez Hotel, Villa de Cortez today. The hotel was built in 1928. Mayor Suarez added that the Valley Nature Center and Gibson Park are also great attractions of Weslaco.

“I would be remiss if I don’t address that one of the biggest problems we have is with flooding. We are landlocked in some areas, so we’re addressing those issues aggressively.” Currently, the City of Weslaco is improving infrastructure, and in the process, creating retention ponds. “We want to be able to pump out water sooner from the streets and residences,” he said.

Mayor Suarez admits that they are not there yet, but all efforts are active today. “We’ve bought some equipment, we’re doing a lot of the work in-house, like the cleaning and the widening of ditches.”

“We have long-term plans that we’re working on. I believe that our drainage system is just going to get better.” Then in June of this year they were tested, but fortunately because of the work done in anticipation, the rainwater receded a lot quicker.

The City of Weslaco will be putting more money into as they have it. “We have a plan; it’s an $84 million drainage improvement system for the next 15 years. We’re going to try to expedite it as we get more money available, but there’s a plan in place that we are already implementing,” he said.

Just recently, Weslaco broke ground on a 43-acre sports park on the north side on Mile 11 and 88. Also, a firehouse number three is going to be there. “It’s already about 30% in construction. It will be adjacent to soccer fields, an amphitheater, with eight acres of wooded area and trails in there,” he said.

“We have partnered with Texas Parks and Wildlife, the EDC, the Knapp Medical Foundation, and the city putting in some money as well.” There is an investment of $1.8 million for that project, he explained.

Mayor Suarez served in the US Army from 1984-87. When he was honorably discharged, he attended Pan-American University, now UTRGV, and graduated with an associate degree in Applied Sciences.

Currently, he is the chief administrator for Hidalgo County Precinct 1. “I work for Hidalgo County Commissioner David Fuentes, as his chief of staff.” He manages 120 employees and works on roads, drainage, balancing the budget, and providing service to county residents.

Mayor Suarez is married to Ramona Suarez, also from Weslaco, and has been for 28 years. He is proud to talk about their three boys, David Xavier, 26; Jonathan, 24; and Gabriel 21.

“I’m humbled and honored that the citizens have allowed me to be their mayor for the last six years. I love this city; it’s been an experience of a lifetime for me,” he said.

“I live and breathe Weslaco. Every day, for me, is a blessing being the mayor of this great city that I love,” he finalized.

Making the U.S./Mexico Border Safe Is Not a Piece of Cake

WATCH: WHAT WILL CHANGE? Dealmaking In The Post-Pandemic Era

Rep. Cuellar Announces Over $14 Million in Federal Funds to Rural...