“If you can visualize it, you can realize it,” – Art Ortega Chairman & CEO Freedom Bank 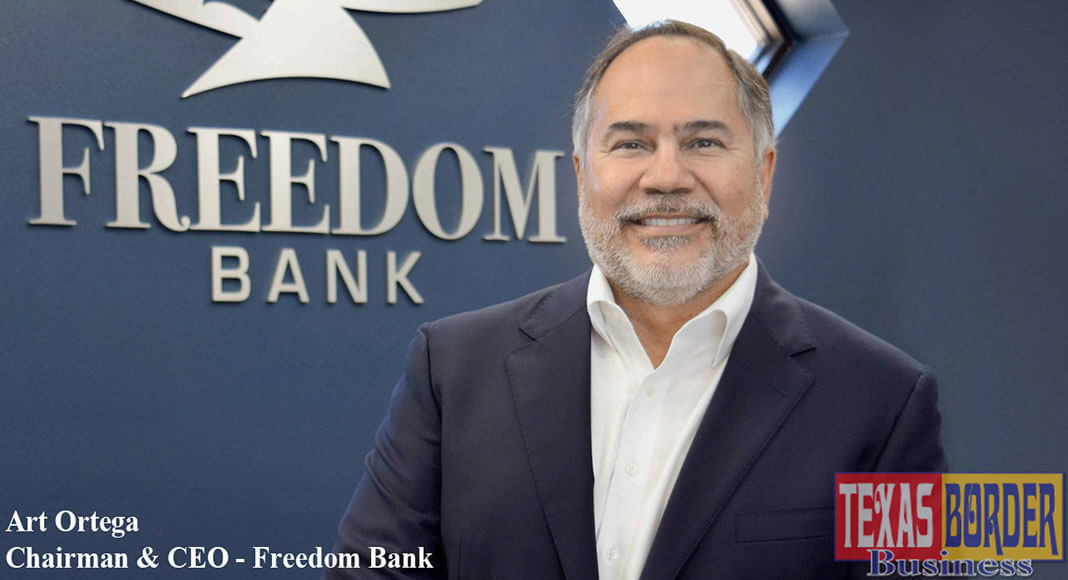 The Rotary Clubs of McAllen will be conducting the first debate for the McAllen Mayoral race
Read more
00:14:35

As originally published in Texas Border Business newsprint edition May 2020

Today, there are few opportunities to be in a market and witness the opening by the expansion of a bank. The bank we are talking about is not just any bank. It is a bank with a foundation of historical roots, created with a purpose, to serve the people of a region. The same idea prevails today; however, the vision has expanded to the Rio Grande Valley, known to many as the Magical Rio Grande Valley.

The history of this bank is moving because, during inception, it went through different phases of growth, but never abandoned the idea to serve the residents of Duval County.

Inspiring because the new Chairman and CEO is planning to devote his time, energy, and banking knowledge in favor of the Rio Grande Valley residents.

Originally the bank was established in 1957 by founders of forward-thinking. After more than six decades, the bank is acquired by a successful financier, a unique businessman in the industry. He is committed to work hard and to take the name of Freedom Bank close to everyone in this region.

Art Ortega, the Chairman and CEO of Freedom Bank, told Texas Border Business in Exclusivity that he always admired Glen Roney, the creator of Texas State Bank. “I started my career there,” he said.

He witnessed how Mr. Roney’s style of lending impacted the communities throughout the Rio Grande Valley.

“I always felt that someday it would be pretty neat to start a bank and have that kind of impact on the community we serve.” He continued, “As fate had it, the right breaks came along, and I was able to make a dream become a reality.”

Ortega is a graduate of Pan American University now UTRGV. He graduated in 1987 with a degree in Finance, which he has always used in his career.

“I started with Texas State Bank in 1985 as a teller and worked my way up to become a lender.” He said, “I then pivoted into the world of investments, worked for three Fortune 500 companies in 16 years.”

Ortega pointed out that he has been on both sides of the ledger; as a bank customer and as a bank owner, so he understands what customers are thinking and what is important to them.

He emphasized that the quality of the attention and the service customers receive at Freedom Bank will send the message that as a community bank still cares.

Ortega credits that the key to his success is the trust he has built around his business and customers. “Garnering clients trust was one of my single biggest achievements. It is no different in my current role as Chairman and CEO of Freedom Bank.”

It is important to note that at the height of his career, Ortega managed over 900 million in assets covering both Private Wealth and Corporate accounts.

The vision for the bank is to be a good corporate citizen. “We are here to provide a service to the community but also to give back to the community. We believe in the areas that we serve; we want to be an important piece in the growth and prosperity of the region,” he said.

According to him, the difference of Freedom Bank from other banks is, “The ability to deliver solutions quickly, the competition is good we HAVE to be better.”

During his 35 years of banking experience, he has learned that reaching common goals is vital. “Helping out the customer and protecting the bank’s interest is sometimes challenging, but having that experience makes reaching solutions way easier.”

Freedom Bank is a full-service South Texas financial institution that operates with a high level of customer satisfaction. “We accomplish this by paying attention and making prudent decisions on sound credit principles, shareholder returns, customer needs, and satisfaction.”

Ortega is aware of the importance of giving back to the community by getting involved in different activities.

When asked why the name Freedom? he said, “Very simple, who doesn’t like Freedom, and Freedom means choices, and nothing represents America better than Freedom. He envisions having strong roots in Hidalgo County and Duval County, where this institution started.

Currently, Freedom Bank stands at 47 million in deposits and growing. According to him, he sees Freedom Bank expanding from Freer West to Laredo, East to Corpus Christi, and the entire RGV.

Ortega knows that to be able to accomplish that, he needs staff with a prepared mindset; that is why they provide a culture that attracts, empowers, rewards, and provides growth opportunities for employees. He said, “At the core of our culture is an unwavering commitment to customer service, integrity, and character which as a whole distinguishes us from the competition.”

Is it challenging to own a bank? “If you can visualize it, you can realize it,” with a couple of caveats, of course, hard work and dedication to the dream,” he finalized.

You have another opportunity to help our country pull together against the pandemic. Last week the Chamber launched the Rally for Recovery Commitment, asking employers to commit to do their part.
Read more

The League, in coordination with The McAllen Chamber of Commerce, will be hosting two virtual political forums.
Read more

At their recent Board Meeting, the Texas City Attorneys Association (TCAA) approved the creation of the Rio Grande Valley – City Attorneys Association (RGV-CAA). TCAA is a branch of the Texas Municipal League that was formed to promote, encourage, and advance the professional development of municipal attorneys throughout the State of Texas.
Read more
- Advertisement -