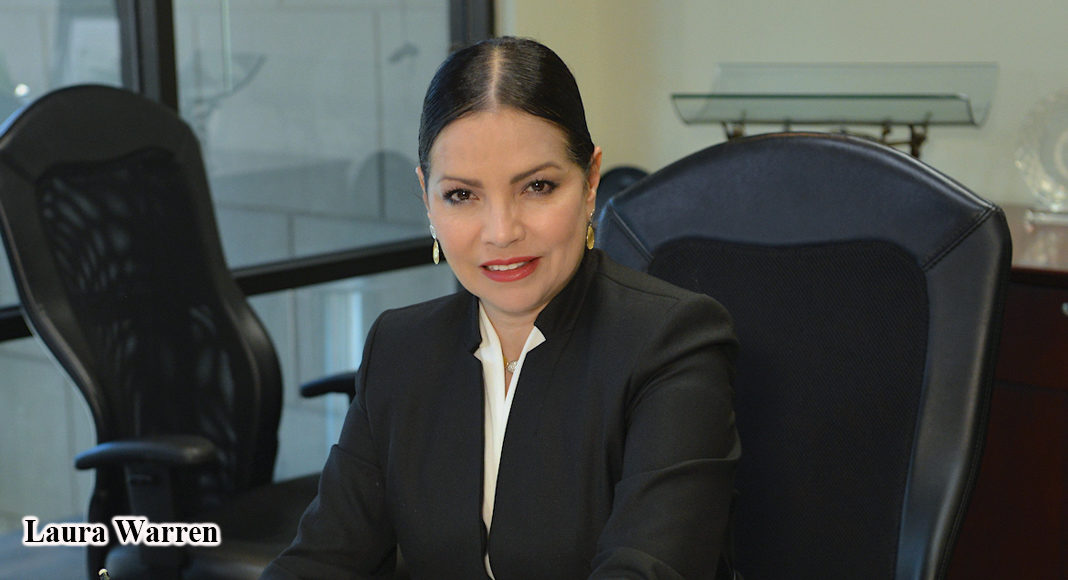 Those who know Laura Warren Ogletree know she is a capable and gifted professional in the architecture and building industry. She is also recognized for her philanthropic activities in the communities that she serves.

That accomplishment says a lot about her commitment to whatever she decides to get into. When she initially told her dad about her desire to become an architect, he said, “give yourself fifteen minutes of self-pity and then go do something about it.” Then he asked, “is there anything else you want to be?”  “An astronaut,” she replied. As is evident, Laura chose to be an architect.

When she moved to the United States, she expressed her desire to study and get an architect license here. However, she was told that it was almost impossible.

Laura endured eight years of internship under a registered architect firms in both Alabama and Texas. When she was ready, it was time to take eleven exams, ranging from four to twelve hours each. “It is not easy,” she told Texas Border Business.

Today, if you drive through South Texas, more than likely, you’ve seen buildings that she has designed, ranging from bank headquarters to large auditoriums and anything else in between.

Laura also had the privilege of working in Vance, Alabama, for the Mercedes Benz Corp. to design and build multiple brand facilities. She worked with German executives; according to Laura, they do business methodically, with no emotions or feelings. “They are all business and focus on a perfect delivery method,” she said.

Laura had a background and experience with industrial design while in Mexico and South America. Because of her experience she was designated as the project manager assisting in the Alabama project to design a facility for services and training. ‘They were the first of many that followed and were anchor type buildings.” She had also worked in Brazil, designing buildings.

When asked if being a woman represents a level of difficulty in an industry dominated by men? “It’s been a challenge; however, I have always refused to see myself as a victim.” She said, “I have been aware that I’m breaking into a field where having a woman is something foreign.” She continued, “It’s not that men don’t like having women in the field, it is that they don’t know what to do with them.”

She also said that she has worked with people who could not connect. But once she gained their trust, they have become lifetime friends.

Laura’s activities to manage her business are not routine. They involved the research of sites for clients and holding numerous meetings, designing, reviewing drawings, as well as submittals, and pay applications to build.

Laura is also a devoted volunteer in different organizations and loves raising funds to help. She made history becoming the first woman as president of the Rotary Club South McAllen while raising two children involved in activities with the Boys and Girls Scouts, tennis, color guard, soccer, band, and much more.

Governor Greg Abbott recently appointed her to serve as member of the Finance Commission of Texas, where she represents the consumer sector for the Rio Grande Valley.

She was also named chair of the McAllen Economic Development Corporation (EDC) for two consecutive years, the same designation comes with responsibilities of the McAllen Foreign Trade Zone and the McAllen Intermodal.

The McAllen Foreign Trade Zone is the first inland non-seaport Foreign Trade Zone in the United States. All these opportunities have given Laura an ample understanding of binational trade, which is paramount to the region. Keith Patridge is the President and CEO of the McAllen EDC. “He was the first person I met when I moved to McAllen,” she said. Also, because of her participation in economic development, she has visited China twice. There, she learned that McAllen and this Region are well known.

Laura has been at the forefront of designing research centers in the McAllen area. She said that current pandemic conditions are sad. “It’s almost unrealistic and feels apocalyptic, but it is making us aware of how things can affect our way of living and working.”

Laura is the president and principal officer of the Warren Group Architects Incorporated. This renowned architect firm serves the entire State of Texas and Latin America. Her firm is currently taking care of modification projects for her clients. They are the architects for Valley Baptist of the Rio Grande Valley, DHR Health, the Veterans Administration, and the GSA. They are doing design and modification for Hidalgo County and building new facilities and changes to the morgue. “Work activity hasn’t stopped.”

Laura said that she has not seen a slowdown in the manufacturing industry, healthcare, and the schools; they keep growing and building new facilities. Her architectural firm is working now in El Paso on a U.S. Oncology facility.

She also is working in Houston and McAllen. “Most of my clients are repeat business.”

“We continue to work in Alabama, South Dakota, Colorado, and I travel all over Texas.” She said, “We also have work in Ciudad Juarez, Mexico and Monterrey.”

Laura has two children, William Austin and Rebecca Nicole. She said it has been nine years since she married Dan Ogletree.  Is Dan a builder? “Yes, he is one of the best.”

Laura has participated in numerous fundraisings, the last one that Texas Border Business covered as a news item was for Easter Seals, a nonprofit organization that implements programs for children with disabilities.

They provide therapy and information to parents to work with their children to help them reach their full potential. During that event, they announced the expansion of that level of service to prevent and help kids get early identification and support to help them get ready for school.

These organization like any other nonprofit needs funds to provide all these services, and that’s when Laura and Dan became available to help raise funds. They had been selected to be part of the Perfect Pair.

“Eleven years ago, this event used to be called the Power of the Purse and has been successful due to wonderful folks like Laura and Dan,” said Pattie Rosenlund, the director of Easter Seals McAllen.

At that time, Texas Border Business asked Laura, Why do you do it? and How do you feel?

“It’s an emotional journey because I was raised by a woman who had polio at age seven. So, I was inspired by her, because having polio never stopped her from doing what she believed in. Also, she instilled in us strong moral values and the idea of doing your best, no matter what.”

“Being here allows us to continue to give the support the children need to be able to succeed and to be the best that they can be,” Laura finalized.

The Brownsville Independent School District (Brownsville ISD) announces today that at a Board of Trustees Meeting, held on May 4, 2021
Read more

Small Business Would Be Hit Hard by Corporate Tax Increase

In the most recent Harlingen Economic Development Corporation Board of Directors’ meeting, the Harlingen EDC board, with great support from the City Commission, approved forgiving nearly $500,000 in loans.
Read more

Walmart and Sam’s Club today announced a new COVID-19 vaccine milestone: Immunizations are now available to customers and associates in all of their more than 5,100 pharmacy locations nationwide, across 49 states, Puerto Rico and Washington, D.C. This includes the more than 500 Walmart and Sam’s Club pharmacies in Texas.
Read more
- Advertisement -