“Professional Sports Should Be a Point of Civic Pride for A Community” – Ron Patel, GGE President 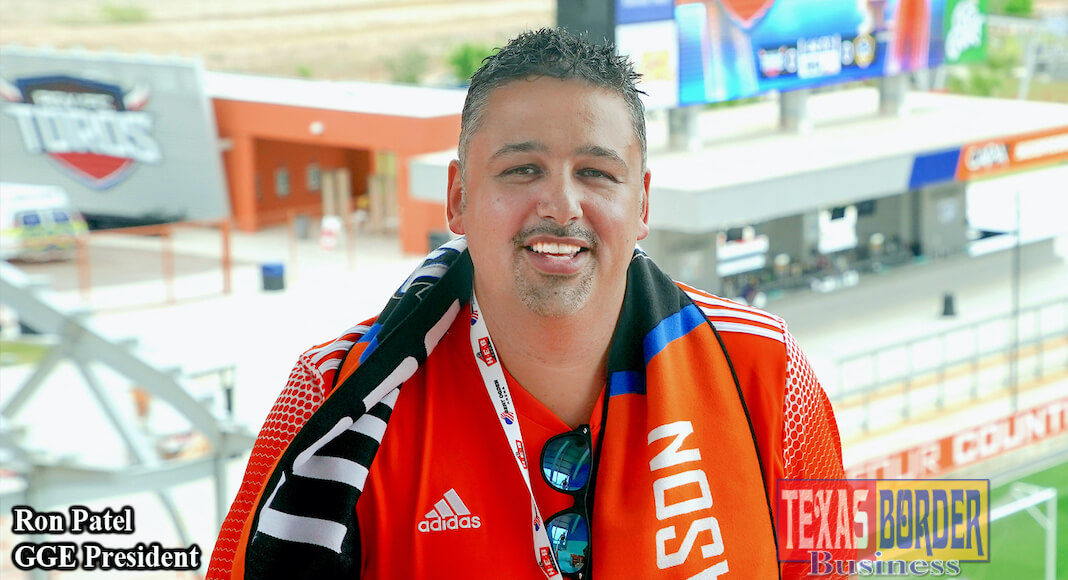 Golden Grape Entertainment, LLC (GGE) is the unique company managing the Bert Ogden Arena and HEB Park. Both facilities represent a dream come true; they were envisioned by the principal of the company, Alonzo Cantu.

GGE now has a new president; he is Ron Patel. Born in Liverpool in the North West of England; he was raised in different cities around the world and ended up in New Mexico for the last 16 years. He was educated at Arizona State University.

The Rio Grande Valley region comprised of four counties: Starr, Hidalgo, Cameron, and Willacy, had not made as noticeable or far-reaching progress as it has in the past ten years.

A series of events was responsible for triggering astonishing growth in the region. This didn’t happen by itself; there have been men and women with vision who have worked hard to achieve what we enjoy today.

Some of the events that are considered essential were the merger of the universities that gave birth to the new University of Texas Rio Grande Valley (UTRGV). Immediately after, came the creation of the school of medicine. The latter was a dream of many and though seemingly impossible, it is now a reality.

Another significant event was the creation of South Texas Community College, now South Texas College. This particular school was the key that opened the doors to workforce education for thousands of young people who would have had to leave the Valley in search of higher education and or be left without one.

These events are like pieces of a puzzle being put together by leaders of the region. They intend to finish a plan that has just begun—just begun? Yes! Other areas had their boom during the past hundred years; the Valley’s boom is just beginning. I call it the last frontier.

To put things in perspective, and to show in detail the importance of the Bert Ogden Arena and HEB Park for South Texas. I needed to show a comparison of other venues, and how long it had taken to be created and replaced. I selected the neighbor city, because it is populated by Bert Ogden Arena and HEB park goers. In other words, very good clients.

So, I contacted my friend and radio host Francisco ‘Paco’ Rojas and asked him about two venues, which were also gems in their time, in the Reynosa, Tamaulipas region of Mexico. I am referring to the ‘Parque de Béisbol Adolfo López Mateos’ (baseball park) and the ‘Monumental Plaza de Toros Reynosa’ (bull ring).

The Reynosa bull ring was inaugurated June 10, 1926; that was 94 years ago. This enterprise has an approximate capacity of 3,500 people and is privately-owned by the family of the late Don Luis Alberto Tamez Leal.

The Reynosa baseball park opened on June 14, 1962, some 58 years ago. The City of Reynosa owns this facility with a capacity of approximately 7,000 people.

I made this comparison with the Mexican city because it is approximately 20 miles from Edinburg where HEB Park and the Bert Ogden Arena sit. The two Mexican facilities made a tremendous economic impact in their time for the region. And believe it or not, both venues are still in service. The Arena and the Soccer Park pull thousands of people from Reynosa; they are great customers.  It takes many years for an entertainment facility to be built. We are fortunate that in our area we enjoy several extensive facilities for that purpose.

It is important to note that Bert Ogden Arena which boasts a capacity of 9,324 seats and HEB Park with its 9,700 seats are not even five years old since their opening. I hope that this comparison helps you to understand how important these pieces of the puzzle are to a region.

Although McAllen* stands on its own in performance facilities, both the Arena and the Soccer Park were long overdue.

Ron, as President of Golden Grape Entertainment, LLC, oversees the promotion of the Bert Ogden Arena and HEB Park for hosting live concerts and sports events that play in those facilities.

He told Texas Border Business that while in Liverpool England, he used to live just one mile from Anfield, the historic soccer stadium where Liverpool FC plays.

“I’ve been a soccer fan my entire life.” He said, “It pretty much runs in my blood.” His family moved to North America when he was nine. Phoenix was his home later, where he attended Arizona State University. He then took a job and moved to Albuquerque, New Mexico.

He got the entrepreneurial bug and started a multi-restaurant delivery service delivering takeout food from restaurants to homes and offices. The company was called “Just Dine In.” Then he merged with “Delivered Dish” and did it for about ten years. The group sold the company to Grub Hub, a publicly-traded company based out of Chicago.

Once he sold the business, he got into sports and helped found an amateur team named Albuquerque Sol FC. The Sol played in the Premier Developmental League, the 4th division of the U.S. Soccer pyramid, and is now known as USL League Two. The success of Sol ignited an interest in the game that resulted in a professional team in New Mexico named New Mexico United. United led the league in attendance last year with an average of over 12,700 fans per match and had four matches with over 15,000 fans in attendance!

Ron said that he was selected by Golden Grape Entertainment to be part of Vipers and Toros. “I wasn’t out looking for a job. I was a part of the fastest-growing USL (United Soccer League) franchise in the country.”

Ron was living the dream but had hit a glass ceiling.  The owner of the team was also the President of the company.

When the word got to him that GGE was searching for a president, Ron saw this as an opportunity. He spoke to his wife; Isabelle and they flew to McAllen to interview for the job.

“I looked around and got floored by the quality of the facilities that Mr. Cantu built. The Bert Ogden Arena, the HEB park and couldn’t believe the incredible gems we have here in the Rio Grande Valley,” he said.

After the interview, he said, “We got on the plane back to Albuquerque, and I looked at my wife, and before I could even say anything, she’s like, “Sweetheart, we have to do this”.”

Ron said that it was bittersweet. “I had built that New Mexico team with a group of really talented people, but I was able to step away proud.”

Ron and his wife bought a house. “We jumped in the deep end on the first day, we got here on a Saturday, and I started the job on Monday.”

According to Ron, he has more involvement with the Toros than with the Vipers. “Rene Borrego is the President of the Vipers and deserves a ton of credit for the success of the team over the last decade,” he said.

He explained that professional sports should be that point of civic pride for a community. “It should be something that brings people together for the common good to show their pride for the place where they live.”

Currently, Ron says that he was working on different offers for the public and had been working for the last six weeks until the world was hit with this significant slowdown.

What about Alonzo Cantu, what role does he play in all your activities?

Ron is excited because as soon as the slowdown is over, they will have exciting basketball and soccer games, and concerts. “Pit Bull is coming; so is Gabriel Iglesias, better known as Fluffy the Comedian. Ricky Martin and Enrique Iglesias are also coming.”

Unfortunately, the Cirque du Soleil show had to be canceled because of coronavirus, but Ron said they are looking to schedule them again.

Ron couldn’t be happier as he is looking forward to inviting the people of South Texas and Mexico to come and experience the most fantastic entertainment in two of the best and newest venues in the Valley. Our boom is just getting started.

*Additional information on venues in the RGV