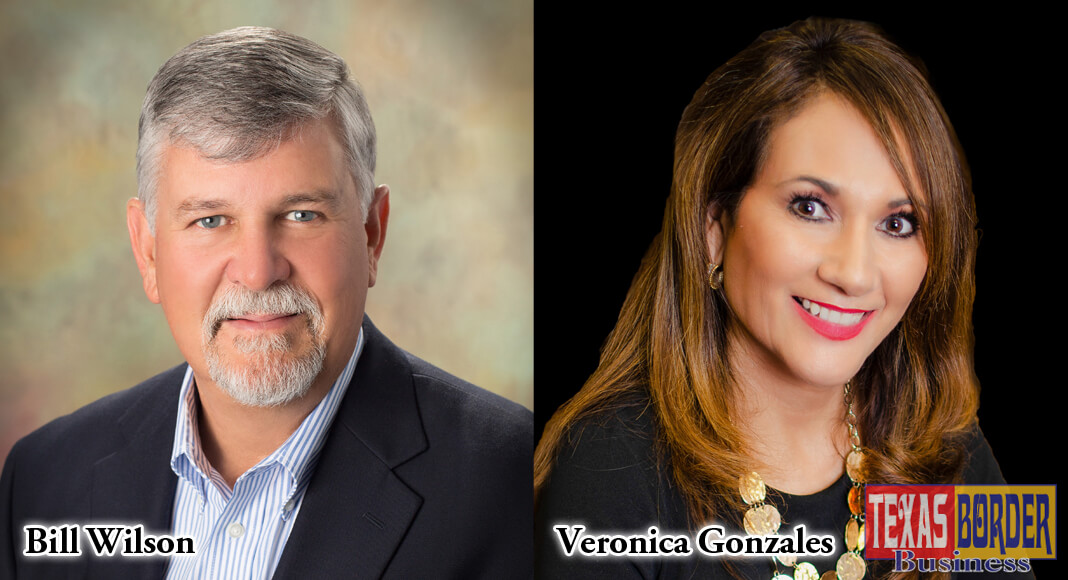 Every year, the McAllen Chamber of Commerce nomination committee selects two outstanding citizens of the community to receive the honor of McAllen’s Man & Woman of the Year.

This past week, the McAllen Chamber of Commerce announced Bill Wilson and Veronica Gonzales-Villarreal as the 2018 Man & Woman of the Year.

Since 1955, the Chamber has honored outstanding individuals for their contributions to the City of McAllen. These individuals are not only successful in their careers, but also volunteer countless hours serving on committees and boards, supporting worthy causes and making a positive impact on our community.

Man of the Year, Bill Wilson has served as Chief Executive Officer of D. Wilson Construction Company since 1987. Bill is a McAllen High School graduate and is a 1984 graduate of Texas A&M University with a B.S. in Agricultural Economics.

As CEO of D. Wilson Construction, Bill has been able to stay active, oversee and engaged in all phases of his construction operations & projects. Many of Wilson’s successful projects are public and private buildings that we all occupy or use within our community and beyond. Some include, Cameron County Academy, South Texas ISD in Olmito, Austin Middle School in San Juan, Veteran’s Memorial High School in Brownsville and Wellness, Hill Country University, Fredericksburg, Recreation Sports Complex at the University of Texas RGV and United Way of South Texas, McAllen.

Bill continues to carry on the legacy of his father, Darrell Wilson, a philanthropist; giving back to the community, supporting countless charitable efforts and contributing to the quality of life in our city. He is a member of the McAllen Chamber of Commerce and has served on several boards: Museum of South Texas History, the Will Looney Legacy Park, Calvary Baptist Children’s Building, Affordable Homes of South Texas and South Texas GMC.

Woman of the Year, Veronica Gonzales-Villarreal served as former State Representative for District 41 for eight years before retiring in 2012. Prior to being elected by the citizens of McAllen, she was a named partner in the law firm of Kittleman, Thomas & Gonzales, PLLC. Veronica currently holds the position of Vice President for Governmental and Community Relations at the University of Texas Rio Grande Valley.

During her tenure as State Representative, Veronica passed several pieces of legislation to benefit McAllen residents. Just to mention a few, authorizing up to $165,000 in loan forgiveness for physicians who agree to proactive in health professional shortage areas, allowing free entrance to museums, such as IMAS, to children on Sundays and creating two additional count courts at law in Hidalgo County.

Just to name a few awards and recognitions, “Emerging Leader” by Dallas Morning News, 2005, named “30 Extraordinary Women in Texas Law” 2008 by Texas Lawyer, Community Service Award 2005 by El Americano Newspaper, Texas Center Professionalism Award, 2007 by The Texas Center for Legal Ethics and Professional and Hidalgo County Bar Association, named “Ultimate Latina Legislator” by United States Hispanic Chamber of Commerce, 2010, recipient of the “Champion for Equality Award” by Stonewall Democrats of the Rio Grande Valley, 2011, inducted into the Rio Grande Valley’s Walk of Fame, 2013, named Shining Star by Zonta of Hidalgo County for Service to Education and Youth, 2016, and featured in Special Edition of The Monitor as 1 of 11 “Women Who Inspire Us” in 2017.

Veronica has served on the Hidalgo Country Bar Association from 1996-2000, member of the McAllen, Edinburg and Mission Chambers of Commerce, current Board member of the Edinburg Chamber of Commerce, Past Advisory Board Member of South Texas Community College, Children’s Defense Fund, Texas Rural Legal Aid, current Advisory Board Member of Lone Star National Bank, current Board of Director for Lower Rio Grande Valley Development Council, incoming president of Easter Seals RGV and Board Member of Advocacy Alliance Center of Texas.

Veronica Gonzales-Villarreal continues to be a strong advocate and community leader not just for the City of McAllen, but for the entire Rio Grande Valley and state.

Wilson and Gonzales-Villarreal will be honored at the Chamber’s 64th Annual Banquet “All Soul’s Day” on Thursday, November 1st from 6:30 p.m. to 10:00 p.m. at Valencia Event Center in McAllen. For sponsorship or ticket information, please contact Blanca Cardenas at 682-2871 or bcardenas@mcallenchamber.com.

Texas’ Summer Heat Could Cause Another Power Crisis

A Letter that Tells the Truth