Being Mayor in Today’s World is Facing Complex Challenges 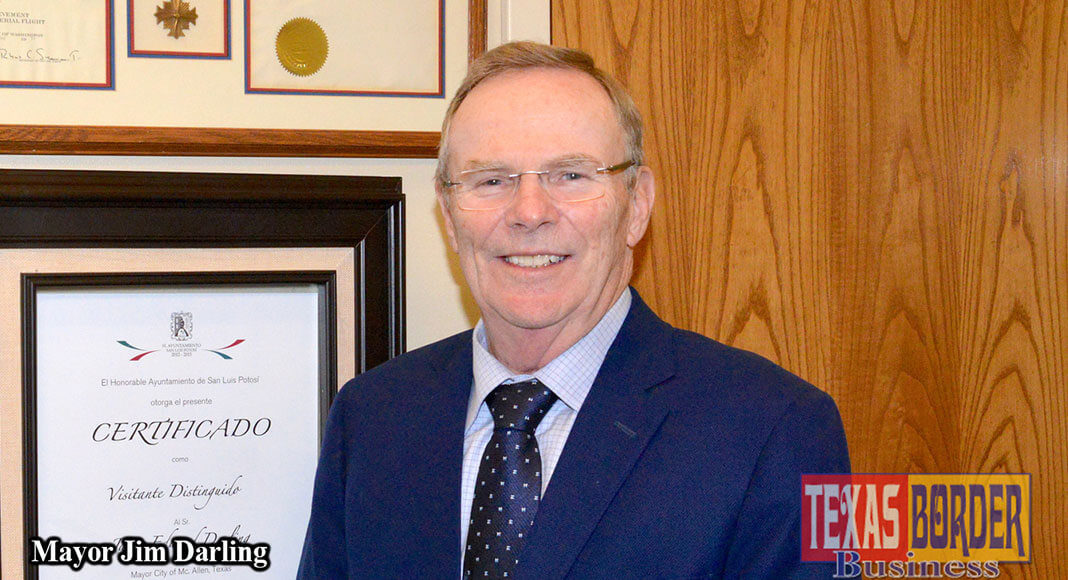 Fab Lab is a 501-C3 non-profit in Downtown El Paso that aims to provide accessible educational experiences for students and professionals to support the development of more ingenious and resourceful products.
Read more
00:03:33

Having a conversation with McAllen Mayor Jim Darling is probably one of the easiest things to do. He is down to earth and gives you the time to have a talk. This is true even when he is running to participate in the numerous activities happening throughout the ‘City of Palms’.

He told Texas Border Business that he is lucky and proud to be the Mayor of this Great City. McAllen is part of the rapidly growing Rio Grande Valley metropolitan area, better known as ‘the Valley’.

Even though in recent years, competition from adjacent municipalities has increased, McAllen still holds the position as the center of international commerce and trade. More importantly, McAllen is one of the gateways to the Republic of Mexico and the countries of Central and South America.

He spoke at length about the challenges he faces as Mayor, and yes, there are many. Drainage, annexation, bridges, and sales taxes, that he says the State of Texas is proposing to take from cities. He thinks the State is sitting on a time bomb. “Under current laws, they are creating the atmosphere of ‘colonias’ to happen again in the State.

“That worries me.” He continued, “It’s nothing that you’re going to see directly in just McAllen, but it’s happening to all our cities around here. We haven’t had a voluntary annexation for the last two years.” This is just the beginning of the conversation.

Mayor Darling came to McAllen in 1978; he had graduated as an attorney from Baylor University and Baylor Law School. Right after, he began serving McAllen during the time of illustrious city servants like Jack Whetsel, Joe Garza, Beto Longoria, and legendary former Mayor Othal Brand, Sr. This reporter knew them all.

Darling served as City Attorney for 28 years before being elected as a McAllen City Commissioner for District 6 for two terms. In 2013, Darling was elected Mayor and reelected in 2017.

He remembers serving as city attorney under Othal Brand Sr. “So, you can’t get a better viewpoint on what a strong Mayor is,” Darling told Texas Border Business. He pointed out that back then, it was Brand’s vision, but he had to do a lot of the work on the back end to get it done. “That was satisfying to me,” Darling said.

When Darling retired in 2006 as a city attorney, he never thought he’d get involved in politics because he saw what it was like. Then, he received a phone call from former Mayor Richard Cortez asking him, “Why don’t you run for city council? Darling said, “No.” Cortez added, we’ll make a good team. Darling said, “No, I’ve been around politics.” Cortez said, well, you won’t get an opponent. Darling said, “Well, maybe.”

Mayor Darling said that he has a pathological inability to say no. And so, he said, “Okay, I’ll do it.”

When Cortez decided not to seek reelection as Mayor in 2013, Darling filed for the seat and ran unopposed and then again in 2017.

His interest in becoming Mayor was to be able to do other things that were not possible as a city commissioner. He said that the City was not growing because of the lack of annexation.

“People around us were growing. The 2010 census showed we weren’t growing like everybody else in part because we didn’t annex, and that goes way back to the eighties and nineties,” he stated. Darling felt he needed to provide leadership and to get annexation going again, only to find out that annexation is now a more significant challenge.

One of the other areas bothering him was planning and zoning. “We were kind of restrictive.”

The old-fashioned way for McAllen to do rezoning was not up to his expectation; everything had to be rezoned. “It was crazy,” he said.

Mayor Darling is satisfied with how Tres Lagos is performing. It is a 2500-acre master-planned community on the north side of McAllen. The City worked hard to implement a Tax Increment Reinvestment Zone (TIRZ) at the Tres Lagos project. The cities around McAllen had already implemented TIRZ, which is a political subdivision of a municipality or county in the State of Texas created to implement tax increment financing.

“Edinburg had three TIRZ zones, in Mission, Sharyland Plantation was a TIRZ and their industrial zone is a TIRZ. The City of Pharr also had a TIRZ.” He said, “We had none because that was not the way McAllen operated.”

Today, the TIRZ zone continues to serve its purpose, “It’s broadened things. It enhanced its development, and the City is growing.”

Mayor Darling wants to accomplish many projects for McAllen. Still, one that wakes him up at three o’clock in the morning, among others, is how to obtain federal and state funding for the Anzalduas bridge.

“If we keep waiting, it’s kind of what comes first, the chicken or the egg.” He said, “Because it’s not like a normal project where you’re spending tax money that doesn’t directly bring you income.” As an example, he said, “A drainage project is great, it helps development, but it doesn’t bring income directly.” Income is significant for everyone, especially for a city that has approximately 140,000 residents and is growing every day.

First, among other items on his agenda, is the redevelopment of the McAllen Economic Development Corporation to be more flexible. And second, he said that historically the development course has been like a general fund supplement for the city manager, for drainage, streets, non-typical industrial development, or economic development issues.

“We invest a lot of money in those. We support a lot of charities, all of that is great, but they’re not economic development.” He said, “I wanted to redirect efforts towards economic development. So, I thought, what is more economic development directly to a city than a bridge? So, the bridge board requested $5 million from the McAllen Economic Development Corporation to pay for the engineering of the commercial port. We want to be ready if and when federal or state money is allocated.”

Mayor Darling also said that in case the funds don’t come from the feds or the state, the alternative plan is private financing. Nevertheless, Mayor Darling and the board will continue to request those funds from federal and state entities. They plan to prepare the Anzalduas Bridge for commercial traffic; this is a project that is needed to alleviate traffic coming into the U.S.

In recent trips to China, Mayor Darling received comments concerning the long traffic lines to cross the international bridges and the violence in Mexico. The same concerns were brought up by prospects during his visits to Korea and Japan. Mayor Darling is not able to fix violence in Mexico. However, related to the improvements to the bridge, he is doing everything possible to resolve the stagnation of commercial traffic.

Another vital project for the immediate future and one that will revolutionize the world is 5G. He has contemplated developing a Tech Park.  “We want to make sure that when 5G comes about that, we’re technology savvy and give our kids opportunities for great jobs and entrepreneurship.” He doesn’t know how the next generation of phones will look, but he asked, “Why couldn’t it be done here?”

He was excited to announce that the City will make a proper announcement in the next sixty days or so.

He said that one of the most critical issues facing cities in the state legislature is that they want to take away sales tax from towns. At one point, he didn’t believe that they can do it, but currently, the laws of annexation limit the ability for a city to annex. He never thought that they could do it, but they did. “The bottom line, they’ve seriously hurt Texas cities.”

“So, if we can’t annex, you’re going to have people developing in the County area, and no building permits, no zoning ordinance, no streetlights, city services, etc. I am not blaming the county; they don’t have the authority to do that. They don’t have the budget either.”

Mayor Darling ended by saying, “To me, the biggest challenge in our area is the state government and what they’re doing, but because of McAllen’s great entrepreneurial spirit, we have a great future ahead of us.”

Taco Palenque Drive-Thru is waiting for you!

Yesterday Gov. Greg Abbott announced the formation of a Task Force on Border and Homeland Security. The Task Force is comprised of key leaders from several state agencies, including the Office of the Attorney General of Texas
Read more

Gov. Greg Abbott announced Thursday that Texas will build a border wall along the state’s boundary with Mexico — but provided no details on where or when.
Read more

The Effects of the Real Estate Market on Brownsville

The City of McAllen is preparing for this year’s McAllen Independence Day Celebration presented by H-E-B.
Read more
- Advertisement -