MCALLEN, TEXAS – DEC. 17, 2016 – More than 1,900 graduates from The University of Texas Rio Grande Valley were all smiles as they accepted their degrees during the Fall 2016 Commencement Ceremonies on Saturday, Dec. 17.

More than 600 graduates also were honored during an evening ceremony on Friday, Dec. 16 on the UTRGV Brownsville Campus. A combined total of 2,578 UTRGV graduates were celebrated in four ceremonies over a two-day period.

Keynote speaker Robert C. Vackar said he went from picking watermelons and hauling bags of cement when he was young, to being CEO of the Bert Ogden Auto Group. Speaking at the 9 a.m. ceremony before the first cohort of students to graduate from the college named for him, he said his car dealerships employ almost 1,000 people and positively impact the lives of many more Valleywide. He shared a glimpse into his life and the many entrepreneurs who impacted it and taught him so many lessons – including how to be relentless, how to have fortitude and how to persevere.

In Spring 2016, Vackar donated $15 million, the largest single donation in the history of higher education in the Rio Grande Valley, to the UTRGV College of Business and Entrepreneurship, which also set up an endowment to provide student scholarships for years to come. To honor Vackar for his extraordinary gift, the college now bears his name.

To be successful, Vackar said, the most important characteristic is “fortitude.

“So what are the characteristics of fortitude? Fortitude is grit, perseverance, resourcefulness and relentlessness. The majority of you graduating from the Robert C. Vackar College of Business and Entrepreneurship will need these characteristics to succeed as an entrepreneur,” he said. “You will need to communicate and most of all you will need to listen. Grit is courage and resolve and it is mental toughness and the strength of your character.”

Vackar advised graduates to always smile, because that will open many doors for them. He also talked about the importance of giving back to the community, which has been implanted in him by his wife Janet, and encouraged them to step up and give back.

MEET A FEW OF THE GRADUATES

One the first Vackar graudates, Victoria Olivarez, 22, from La Blanca, earned her degree in computer information systems. Olivarez said she is proud to be the first in her family to graduate from college.

“I’ve been dreaming about this day for a very long time,” she said. “I’m looking forward to the future, with all the knowledge I have gained here at UTRGV.”

Olivarez said she got to conduct research as an underclassman and was able to present her findings – which examined what skills employers were seeking most in her field of study – at a conference in Dallas.

Olivarez, who gained numerous scholarships to finance her education and also worked as a team leader at the Edinburg Campus Student Union, plans to enhance her skills and marketability by entering a master’s program at UTRGV this spring in communications, her minor.

“I know it is useful to have a computer and technology background … but I know communication is an integral role in any organization, so I think tying all those together, it will help me out,” she said. “I must continue improving myself to stay ahead of the game.”

Harlingen native Ariel Irby-Freeman is one of 21 students who graduated with a Master of Science in Occupational Therapy on Saturday. Irby-Freeman, 26, said she has always been interested in the healthcare field and earned a bachelor’s degree in allied health from Texas A&M University in 2013. After shadowing an occupational therapist, she knew that was the career path for her.

“It’s a very holistic career,” Irby-Freeman said. “I get to help people live their lives to the fullest and be as independent as possible.”

Irby-Freeman said she wanted to return to the Valley, and finding UTRGV’s rigorous program was “the cherry on top.”

“It was a win-win across all fronts for me, choosing UTRGV,” she said. “It was the perfect fit for me and I know the foundation that was set here will help me to propel forward on a path to success.”

Irby-Freeman said she has a few job offers already and is studying to take her licensing exam.  She plans to practice occupational therapy in the Valley. 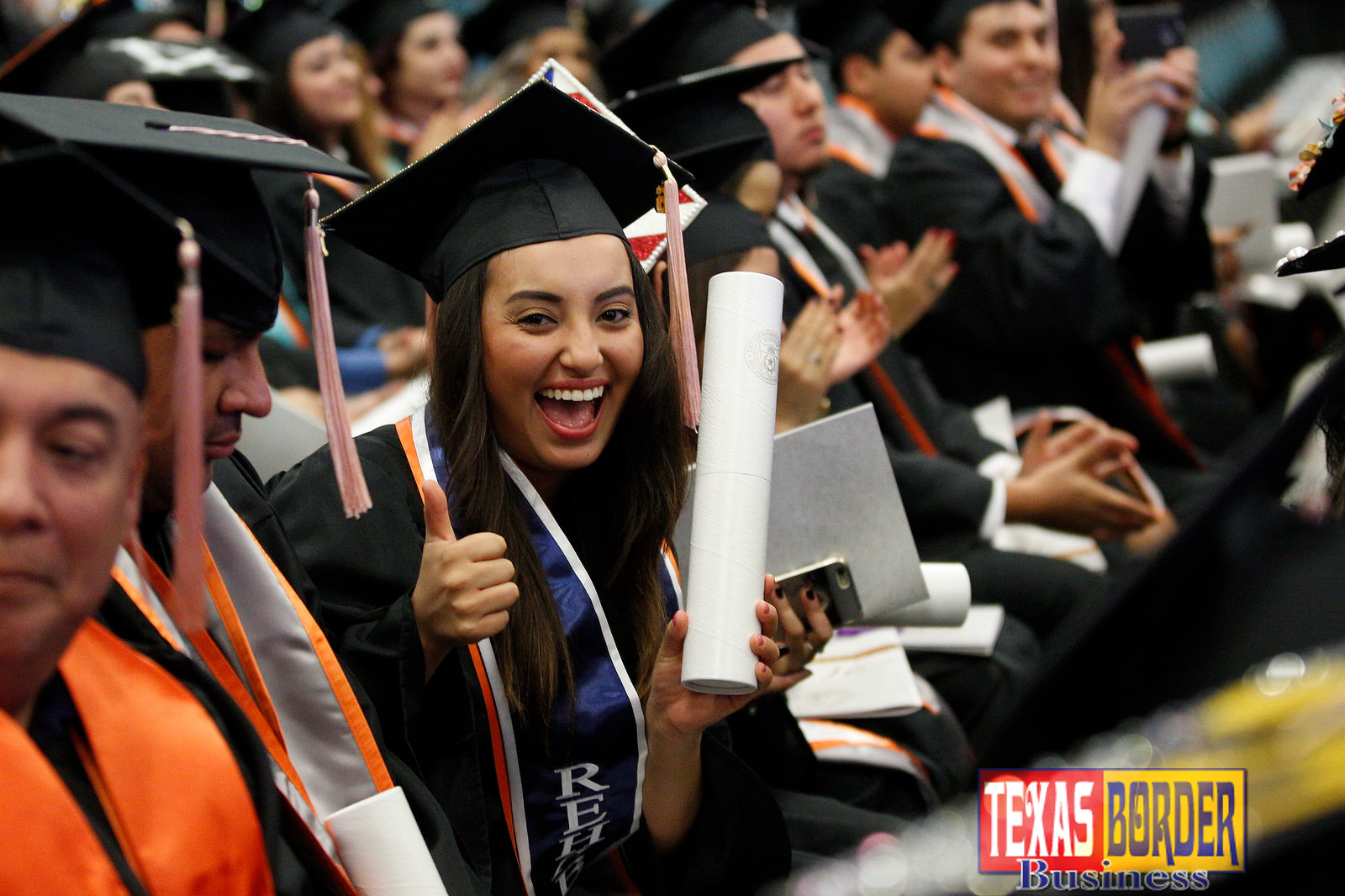 To commemorate commencement, a stately bronze bell, circa 1850, was rung for the first time during the ceremonies at the McAllen Convention Center to conclude the events. Symbolic of a rite of passage, the ringing of the bell proclaims that the graduates have passed from one station in their life to a new and distinguished stage.

The ringing of the bell is inherited from UTRGV legacy institution UT Brownsville. The Bell was rung by two graduating students at each ceremony who have been actively involved in student life initiatives, who demonstrated academic excellence and who embody the Vaquero Honor Code. Bell ringers included Rebecca Reyes and Alberto Adame, the first UTRGV Student Government Association president, at 9 a.m.; Laura Cantu and Kimberly Castillo at 1 p.m.; and Marc Roque and Stephen Lopez at 5 p.m.