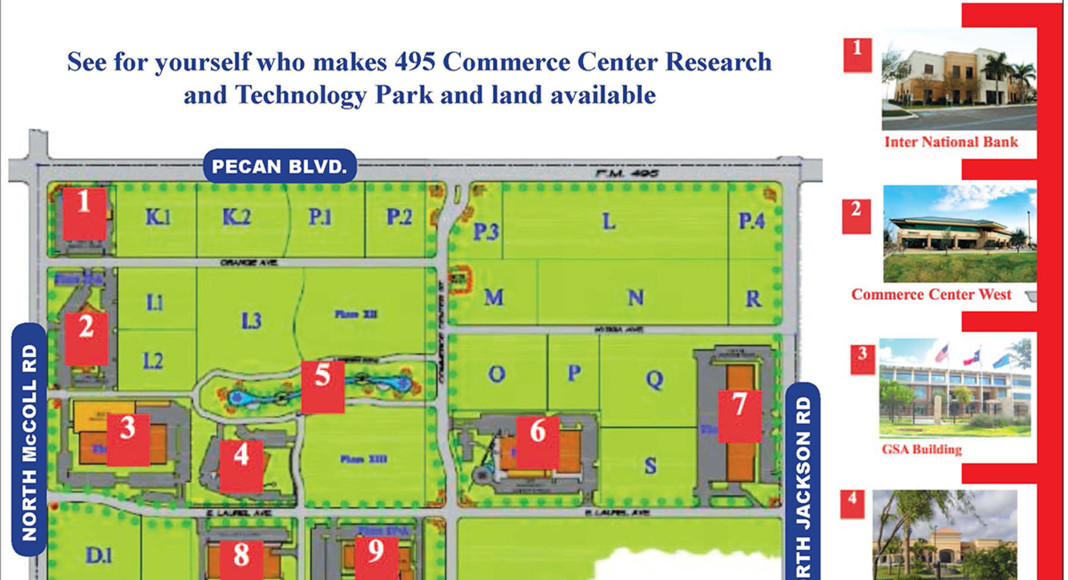 South Texas is experiencing a positive atmosphere for business. The announcement of the university merger and the medical school are at the top of what is coming and already transforming South Texas, but these are not the only events. Duke Energy Renewables will construct a major Wind Farm in Starr County that will consist of two phases, with a total of 200 wind turbines generating 400 megawatts of electricity, with hiring beginning in December 2013. The second project would likely begin construction during 2015 and be operational during 2016, according to Duke Energy Renewables. Willacy County has already benefitted from Duke’s earlier Wind Farm projects along the coast.

On the natural gas front, both Edinburg and Harlingen have announced their communities will see the construction of natural gas power generation plants in 2014-2016, subsidiaries and partners of Bechtel will be managing and partnering on these major projects.

Coronado Power Ventures and Bechtel announced plans to construct a $650 million power plant in the Harlingen Industrial Park, planning to employ over 600 people during the construction phase and hiring will start towards the end of 2013.

In Edinburg, a $650 million natural gas-fueled electricity generation plant will be built, creating around 500 construction jobs during the 3-year construction phase and 30 full time employee jobs once it is operational.

On top of that, on July 30, 2013, Doctors Hospital at Renaissance (DHR) announced what could be one of the most important projects benefiting South Texans.

In a press conference, Dr. Carlos Cardenas in conjunction with Gary Puckrein, Ph.D., president and CEO of the National Minority Quality Forum, and Salvatore Alesci, M.D., Ph.D., vice president of Scientific Affairs for PhRMA, both entities based in Washington DC, announced that they were in discussions with the National Clinical Trial Network to bring research opportunities to South Texas.

They announced that through a potential partnership with the National Clinical Trials Network, Doctors Hospital at Renaissance would work with leading corporations and organization such as the Microsoft Corporation and the Pharmaceutical Research and Manufacturers of America to bring cutting-edge clinical trial research to South Texas patients.

The goal, and this according to Dr. Cardenas, of bringing clinical research to the Rio Grande Valley is to provide patients with access to new, innovative, and life-saving therapeutic treatment options. Presently, South Texans are extremely limited in their ability to access innovative treatments due to limited access to leading research centers.

Israel Rocha, Government, Corporate Public Affairs Officer for DHR told Texas Border Business that the partnership with the National Clinical Trial Network was scheduled for signature this November 2013 however this has been moved to February 2014 with a big announcement and press conference.

“Because of the clinical trails announcement, Charles Mueller and Jim Collins, two among the most important developers of the area, are dedicating their 495 Commerce Center for companies that want to do scientific clinical research,” said by Michael J. Blum, managing partner of NAI Rio Grande Valley, a global real estate company and the exclusive advisor for the sale and/or lease of the 495 Commerce Center, a 110 acre, master-planned, mixed-use park in McAllen.

The three businessmen clearly understand that with the start of clinical research in this area, South Texans would gain access to life-saving trial programs. As such the developers are working to partner with institutions of higher education in order to attract high quality jobs to McAllen and the region.

Mueller told Texas Border Business that 495 Research and Technology Park is a Green property.  “We capture and filter storm water to fill the lake, which is then used to irrigate the 120 oak trees and the green space that helps to define the development.”

What is 495 Commerce Center?

495 Commerce Center is a master-planned, mixed-use business park in McAllen, Texas.  The development is already home to nine (9) Class A buildings with one (1) more in the planning stages.

The development was conceived in 1997, and today the developers have embarked on a new focus… 495 Commerce Center Research and Technology Park (CCRTP) aims at attracting public, private and institutional investments within the scientific community.

The New Veterans Administration Clinic is under construction and is adjacent to the site. 495 Commerce Center Research and Technology Park puts the professional in close proximity and quick access to the State or Federal Courthouse, regional medical facilities in Edinburg, McAllen, Mission, and McAllen Miller International airport.

Mueller emphasized that the property has deep buried fiber and said, “What we have is the most robust fiber available in the Valley.  In addition, there is a SONET ring for redundancy and 3 other Internet providers within the park.”

Blum explained that the SONET ring is an intelligent system that provides advanced network management and a standard optical interface.

Fiber-based SONET ring service is a good choice for enterprises that need failure-resistant networks and move a high volume of voice/VoIP, video and data traffic between branch offices, data centers and other locations. Its duplex architecture can help restore your critical business applications within milliseconds of a disruption. It can also scale easily, so your network can grow as bandwidth requirements increase.

Blum pointed out that it is important to mention that a limited supply of large tracts of contiguous land is available. Of the 110 acres, there are 52 acres left of high visibility with close proximity to all major transportation arteries.  The park is respected for the attention to detail that has preserved and protected property values while enticing the entrepreneurial, creative spirit of developers.

495 Commerce Center Research Park is thoughtfully designed and contains the appropriate fiber and other infrastructure essentials to support scientific and technology innovation, aside from being a short distance to all the acute care and specialty health care facilities in McAllen, Edinburg, and Mission. A one-acre man-made lake with walking trails is the centerpiece of the development. 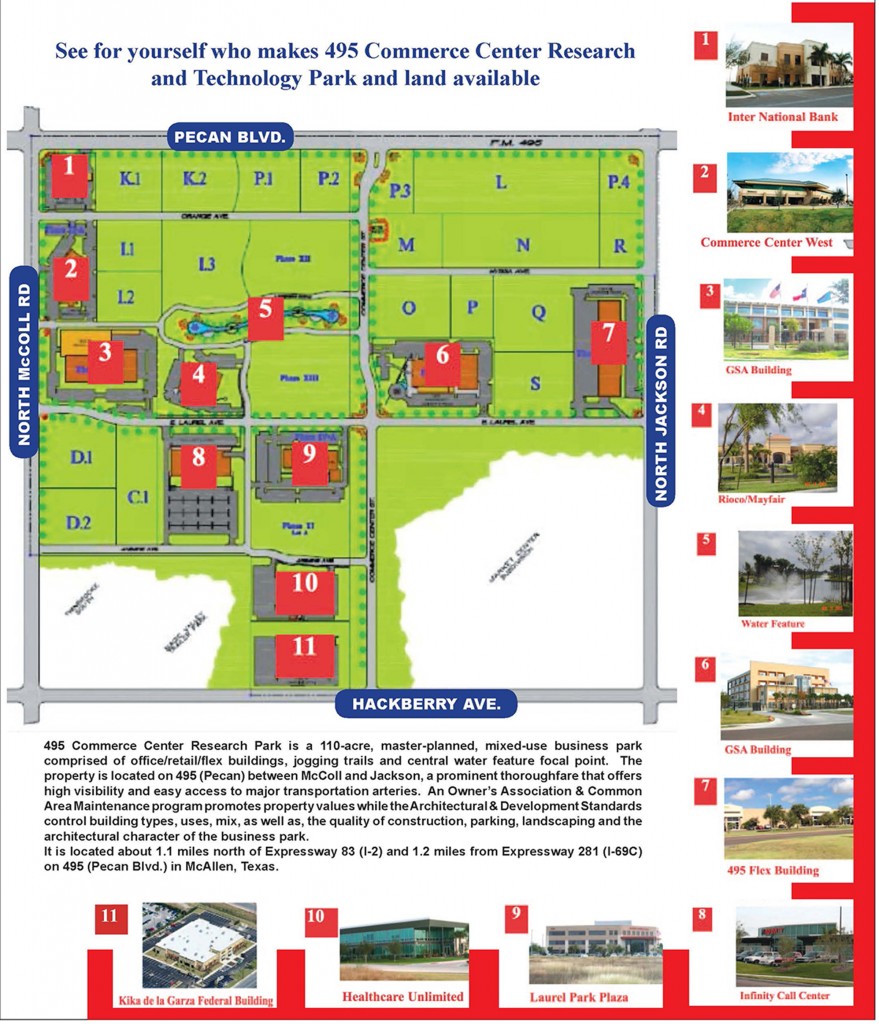 Freeze Brings Finger Pointing and Being Left Out

“Damages and economic cost of the storm will be massive,” M. Ray Perryman

The recent extreme winter weather is unprecedented in Texas. Records were shattered, and the cold lingered for a spell.
Read more

How to apply for FEMA assistance

Texans in more than 100 counties can begin applying for assistance from the Federal Emergency Management Agency to help them recover from last week’s massive winter storm. The number of counties whose residents qualify for such aid could grow “as more work is done to evaluate need,” said the White House press secretary. The aid comes after Texas sustained between $45 and $50 billion in damage and economic loss from the storm.
Read more

Texas often prides itself on being a low-regulation state that puts the free market ahead of all else.
Read more