Home News Exclusives “I Want the City of Mission to be the Founding Location for... 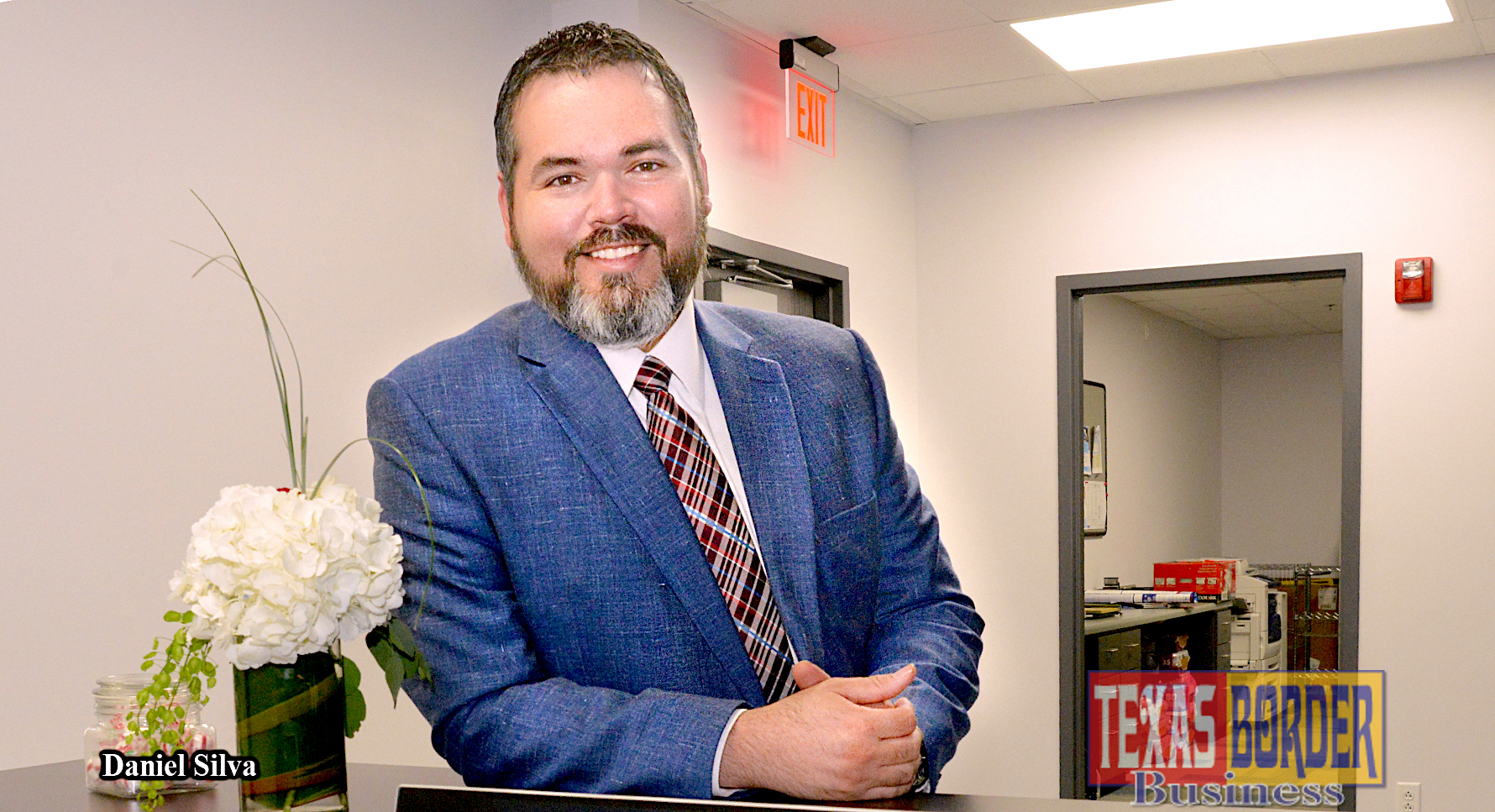 Daniel Silva is the Chief Executive Officer with the Mission Economic Development Corporation as of December of 2018; however, he has been around a lot longer.

Daniel graduated from Pan-American University with a computer information systems degree, and at the time he couldn’t find a job in his field. “I applied everywhere – data centers, school districts, hospitals, and banks. I couldn’t find a computer-related job because everybody wanted somebody that had experience,” he told Texas Border Business.

When Pat interviewed him, he told him, “You’re not going to do anything computer-related here.” At that point, Daniel didn’t care, because if he was going to be paid, he was willing to work and learn whatever job. His main goal was to be employed.

He said, “That’s how I got into economic development, and I moved to Mission right after that. So, I’ve been living in Mission since 2005.”

At one point in time, he and his family were from nowhere. As he says, he was an army brat. “I was born in Houston, moved to California, moved to North Carolina, then to Oklahoma. My dad was in the U.S. Army for 11 years.”

Daniel said that his parents both had family in the Rio Grande Valley, so when he was in fifth grade, they decided to relocate in Edinburg. “I graduated from Edinburg North and then went to Pan-Am University for my undergraduate.”

Pete and Mary Silva are the proud parents, even though his mom passed away, he remembers her with love and misses her. When he met his wife Monica, they decided to get married in November 2004. Unfortunately, his mom passed away two days before the wedding. “We continued with the wedding because we knew that that’s what she would have wanted. But she is a huge part of me, she gave me the character that I am, and I owe everything to her and my dad.”

Daniel has a sister named Cindy, two years older than him and a brother Alex, eight years younger. Cindy attended Pan Am University and moved to Texas A&M Kingsville; she is a teacher. Alex graduated from Pan Am with a marketing degree; he works with Dell computers in Austin.

Daniel and Monica have been married for the last 15 years and have two children; Daniel Andrew, 13, and Bianca Sarai, 10. Monica is the librarian at John H. Shary school, and together form a beautiful young family.

Even though Daniel started at zero, today it’s a different situation. He worked under two very talented EDC directors, which he considers Pat Townsend Jr. and Alex Meade ‘his mentors’. He learned a lot from their different styles.

In this case, how do you attract new companies?

“Originally, when I first started, we were focused on industrial.” He said, “When Alex Meade came in 2011, he changed the focus to do local attraction.”

Next October, Daniel will celebrate 15 years working at attracting industry and retail. Since then, many things have changed.

“When I first started Expressway 83 was still a two-lane expressway, there was no retail development on Shary Road, it was a field. Plantation had already started to develop, and they were building and growing. So, there was a lot of spare space, which today, that is no longer the case.” When he began, the expressway construction had also started, and today as he says, we have a robust I-2 Interstate level expressway.

“HEB and Target bring a substantial amount of retail sales to the City of Mission. Shary Road was in the development process, which back then was just a dream,” he said.

Daniel was very much part of the 174 acres development where the Mission Convention Center lays. The idea has been so successful that approximately, only ten acres are left.

The City of Mission is an attraction for new families looking to settle there. They are moving into different master communities like Bentsen Palms.

There are different stories about companies that have moved to Mission. Some have moved in because of expansion, others to start a business. Nevertheless, the development has been a success. Through his efforts and that of a team that works diligently with him, they have been able to bring high-tech plastics, and repurposed a building to house Southwest Steel.

Mission is an ideal city and perfect for Plantation Produce, which developed cold storage spaces. Royal Technologies has a beautiful 350,000 square foot building and also LFD, and other companies have come and found it to be ideal.

His focus at Mission EDC is still to recruit manufacturing companies and retail, but there is also a special effort to work with companies looking to hire staff. “We are also focused on job training programs.” This last part is vital; they offer a skilled workforce. “I’m focusing on providing skill sets, soft skills, hard skills, that people from this community can obtain, and be a better-qualified candidate for any company,” Daniel said.

He pointed out that while they are attracting companies, they’re looking for employees that are more technologically-driven. The good news is that two days before this interview, he learned that Mission obtained a $490,000 grant through the state’s Texas Workforce. “The gift is to be used for cybersecurity training.”

What is your dream for Mission?

“A dream for the City of Mission is to be the founding location for technology start-ups.” He said, “I want for Mission to be known for its start-up generation, for being able to have companies come in and have resources in the community throughout the City, through the EDC, and through the Chamber. And for them to be able to rely on us to help them succeed and help them grow.”

If you have visited with Daniel, then you are familiar with their beautiful headquarters at the Center for Education and Economic Development (CEED). The facility is considered a dynamic co-working facility managed by Mission EDC.

According to Daniel, CEED’s goal is to help create an Entrepreneurial, Science, Technology, Engineering, Art, and Math (E-STEAM) ecosystem. The idea is to lead to more sustainable businesses and a 21st Century ready workforce in the City of Mission.

Their headquarters is now used by different entities, among them are Teach for America, UTRGV, and Customs and Border Patrol have used their classrooms for training facilities. The fire department for the City of Mission uses them regularly, and the police department does train there as well.

Daniel says that the facility is an excellent asset in the community. “We have small private office space for true start-ups, we do 12-month leases, with the understanding that the turnover is going to be high.” He continued, “We take care of a lot of their overhead, they pay for their office space. We take care of the internet, the electricity, and we have receptionists in the front who will guide any visitors that they have. We eliminated as many barriers as we could for a business to start up.”

In the beginning, there was a plan to accomplish three things. “The first one was to make sure that we had a collaborative workspace. Also, a lot of open seats so that people can come and co-work, they can bounce ideas off of each other.

The second objective was to create a relaxed, creative environment, young people with computers, working for a company remotely.

The third objective they wanted was to be readily accessible to them. “We wanted to have our offices within the building. We didn’t want to have an incubator or disassociation between the tenants and us.” He said, “We wanted for them to be able to come and knock on our door and say, “Hey, I have a problem, can you help me?” Daniel runs his operation with 14 team members, including himself; originally there were only four.

Daniel feels proud about the recent announcement that Mission won the All-American City designation. “Having accomplished that, it now sets the bar higher, and we need to continue to succeed and innovate.”

He recognizes that the elected officials provided the direction and the vision, and that is how the community comes together.

Daniel said that what excites him the most about Economic Development is the impact that they can make. “Nobody knows what an Economic Development Corporation does, and they don’t know that we exist. We’re on the back end of everything, but we’re able to be involved in a lot of things when it comes to city decisions, city planning, and land use. “When it comes to dealing with companies looking to relocate, I’m able to be involved with all of that.”

“When people think of Mission, I want them to feel about Mission as an innovative community, as an area that can grow, that can feed itself, and can evolve into what it needs to be,” Daniel concluded.

Making the U.S./Mexico Border Safe Is Not a Piece of Cake

WATCH: SpaceX 1st Astronaut Mission for NASA – Postponed for May...

WATCH: WHAT WILL CHANGE? Dealmaking In The Post-Pandemic Era