For 35 years, he built for others and now for his own company ICCON, LLC. 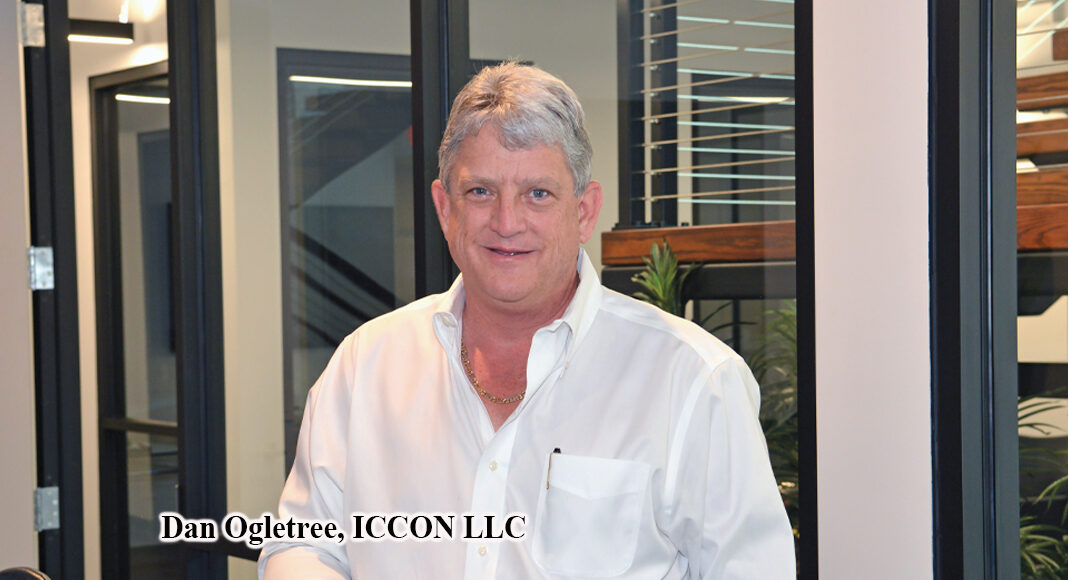 Daniel “Dan” Ogletree has been in the building industry most of his life.  At very young age, he started working in the construction business.  Since then, he has worked on and seen countless buildings go up, mainly commercial and industrial.

Ogletree is a general contractor based in McAllen and provides services throughout the state of Texas.  He told Texas Border Business, “I’ve done work in El Paso, Corpus Christi, San Antonio, Austin, Del Rio, and Laredo.  We go anywhere in the state when our clients ask us to follow them to perform either expansions, remodels, or new facilities.” His construction company is ICCON, LLC, an acronym for Industrial, Commercial Construction, which is his specialty.

Anyone who has dealt with Ogletree comes to the same conclusion that he knows about building, above all, he is a solid and seasoned professional.  Only a few might equal his experience and talent in the building craft.

Ogletree started working in the construction field under his sixteen-year-old brother.  He was only fourteen at the time, and his brother paid him a portion of his check depending on how much work Ogletree had performed.  “He had control over what I got paid.  I’ve been working in the industry since then,” he said.

After 12 years, he decided to accept a job with CF Jordan from El Paso.  The company started building the first facilities in Sharyland Business Park in Mission, Texas.

Around that time, he met Ralph Bullard, a direct connection with the Hunt family.  The Hunts had acquired 6,000 acres of land.  The business relationship with Bullard lasted 22 years.

The Sharyland project became one of the greatest and largest developments at the time.  It practically changed the face of the region and gave new life to the entire region that still prevails.

“Now you know that I started at the bottom of the ladder sweeping and cleaning job sites until I became superintendent of construction of multiple industrial and commercial buildings.”  Ogletree built many facilities; those accomplishments are the pilar of his reputation as a builder.  Out of the many buildings, three are Walmart stores in Hidalgo County.  One of them is now the McAllen Library on Nolana and North 23rd St.

“I built that one when I turned 28.  Some superintendents in the industry were afraid to build large boxes like this one because of fear of the liability of liquidated damages.” When the offer came to him, he asked himself, “What do I have to lose? And I took the job.”

At the same time, a Walmart competitor started building a Kmart one block south on 23rd.  Because of that, the project manager for Walmart challenged him by saying, ‘you need to beat Kmart and finish up first.’ So, he did.  Ogletree said, “Kmart started about 45 days before we did.  We finished a month before they did.”

There isn’t a dull moment in his industry; the construction of large-scale buildings is for craftsmen like him.  There are hundreds of moving parts that have a completion date.  All of them must fall at the right time, at the right place, and be performed by true professionals of the industry.  That is where he comes into action.  He orders and supervises every move; he knows the subcontractors’ abilities and talents, and magically everything falls into place.

He recently finished the construction of a multi-million-dollar facility in McAllen for Mr. Elio Botello, a prominent businessman in the produce industry.  Ogletree said that Mr. Botello was satisfied with the work ICCON, LLC provided.  When Ogletree is involved in a construction project, the results are ‘the customer is satisfied’.

Daniel Ogletree was born in Alpine, Texas but raised in the Rio Grande Valley.  He is the son of Alfred H. Ogletree (February 5, 1930 – June 24, 2019), an American baseball coach in NCAA Division I college baseball.

His father is a legendary baseball coach that made history when he led Pan American to their first-ever College World Series appearance in the 1971 College World Series tournament.  He feels very proud of his dad and his accomplishments and often remembers him and his dedication to his profession.

Before graduating from high school, Ogletree took mechanical and architectural draftsmanship, skills that have given him the edge in construction.  He said, “At the time of graduation, my dad gave me the choice of either going and playing baseball for him and getting an education or going to work in the construction industry.” He asked himself, “Well, do I want to go to school, or do I want to make money? So, I took the money.”

As he tells the story, back then, there was no education for construction.  So, his decision to take the extra mechanical and architectural drafting classes was the right decision for him.

Ogletree said, “I always liked drawing and painting, so I had an advantage with that experience.  My brother-in-law hired me as a draftsman at a time when everything was done by hand.”  He took advantage of every opportunity given to him, first as a draftsman, then as time went on, he became superintendent and did drafting simultaneously.

What motivates him to stay in business is his passion for building.  He said that ever since he could remember, he always liked to construct models or build different things by hand.  “We were always building tree houses,” he said.

“Construction has many components that you need to be put together and coordinate; it is never boring.”  He said that building school facilities was always fun.  There is so much coordination required when dealing with structures, foundations, and the different components, also the electricians, plumbers, and carpenters, and getting it done on time.

“The other unique part of the business is dealing with subcontractors’ personalities.” He said, “Most of them understand the nature of the business; with others, you have to be firm, similar to being a collegiate coach.”

Even though he concentrates on commercial and industrial projects, he has built memorials.  One of the memorials is at Texas Oncology Cancer Clinic in McAllen, and the second one is a Memorial in front of the UTRGV baseball field in his father’s and mother’s honor.

When planning this conversation with Ogletree, he wanted to convey different aspects of his services.  He wants prospects to know that ICCON, LLC strives to get a project built the best way possible and aligned with the budget.  He emphasized that he runs his company with honesty and integrity, which is why he has a list of satisfied clients that wouldn’t hesitate to hire ICCON, LLC again.

Ogletree is married to Laura N. Warren Ogletree, president of The Warren Group Architects based in McAllen, Texas.

“When I met Laura, I enjoyed being around her.  She understood me, and I understood her because we are in similar businesses.” He said, “It’s always hard to find somebody interested in what you do, and vice versa.”

He has never forgotten how they met.  “I was working for CF Jordan, and we were doing the second project at Sharyland Business Park.  At the time, she worked for an architectural firm as a project manager and an intern working towards her license.”

Ogletree said that Laura would come to the job sites for the routine inspection of what was being done.  “I would show her around the job sites.  If we had any issues, I would bring them to her attention as she was representing the Austin Group, the architectural firm of record.”

Selecting Dan Ogletree for the construction of your facilities would be the right decision.  Experience, honesty, and craftsmanship come along with the deal.  He has spent years in the industry working for others, and after 35 years he owns his company and says, “Now it’s my turn.”

Dan Ogletree is the President and CEO of ICCON, LLC; he can be reached at dan@icconllc.com.

Roberto Hugo Gonzalez, winner of the 2009 SBA Journalist of the Year Award and the 2009 and 2012 Paul Harris Award recipient.

DHS Sued for Illegal Comm. on Search Warrant in Raid on Trump’s Home