A Husband and Wife Remind Us the American Dream Is Alive 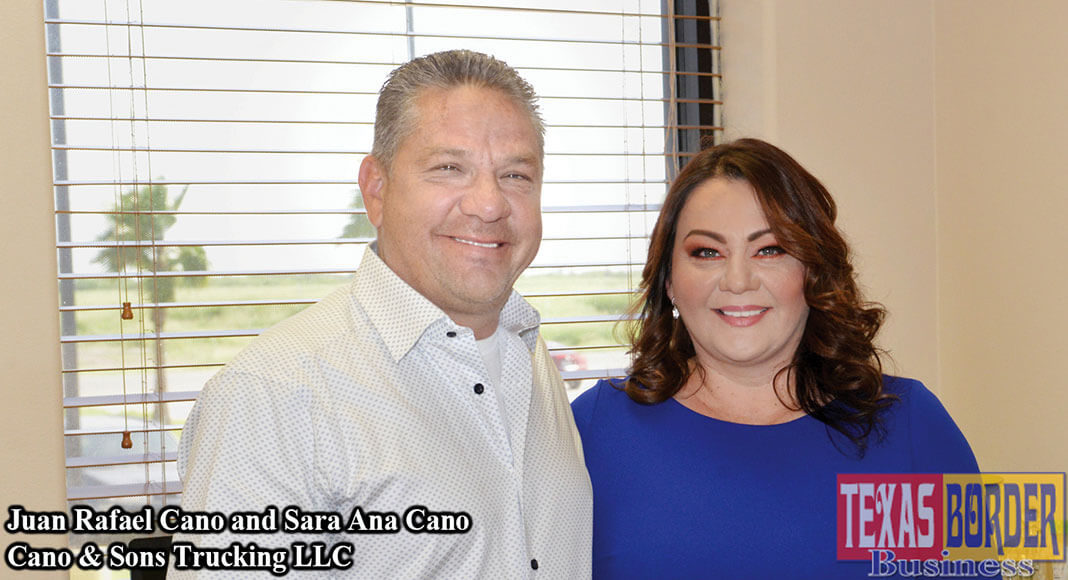 I left the meeting with a great feeling, knowing that the American Dream is alive and well. Having met Juan Rafael Cano and his wife Sara Ana, was indeed an honor.

They met and married when they were teenagers and worked in the beet fields of Minnesota. At a certain point during our interview, Juan Rafael asks his wife, “Did you ever imagine that we would do so well in business?”

The couple owns and operates Cano & Sons Trucking, a successful company which started in 1999 and incorporated in 2003. Today, they run a fleet of 150 vehicles, and only three of them have no driver, but they use the units to interchange with the trucks that need service.

Juan Rafael is a seasoned driver; he grew up learning from his dad Mr. Reynaldo Cano; he was also in the trucking business. There is little or nothing that you can tell Juan Rafael about how this business is run. He has done it all.

With his knowledge of the business, a strong determination, and the support of his wife Sara, Juan Rafael transformed this trucking operation into a reliable and competitive transportation corporation. They have grown their company into a strong trucking fleet with over 160 employees.

Before their success, Juan Rafael spent days and sometimes nights on the road. He drove his eighteen-wheeler hauling merchandise throughout Texas and all the adjacent states while keeping in touch with Sara. There was a time when he says that he was an absent father, but not really. Sara called him often, and that’s how they handled their family matters. “At the beginning, it was hard because we had to sell my truck and use the money for a down payment for the first truck,” he said.

“I relied on neighbors for transportation to take me to the store or different errands,” she explained.

In the beginning, Sara was holding down the fort at home and raising their three sons. “The oldest, Juan Rafael Cano, Jr. is 26, Erik Eduardo is 24, and Sebastián is 19 years old,” she told Texas Border Business.

In 2020 the story is different, the trucking company is thriving despite the pandemic times we are living in. Cano & Sons Trucking is at a different level today; they offer specialized services in temperature-controlled units and dry van trailers along with logistics, warehousing, and 3PL services.

The company is a stable company, Juan Rafael put in a foundation of five years in a business that it is challenging to survive. It’s complicated, expensive, and dangerous, especially when a vehicle of this magnitude weights more than 40,000 lbs.

Cano & Sons Trucking is now an international company; they service the U.S. to all the republic of Mexico, and Mexico to the U.S. door to door routes and all of the U.S.’s 48 contiguous states.

Because of his growing needs, Cano & Sons Trucking built a state-of-the-art facility in September 2011 only 5 minutes away from the Reynosa-Pharr International Bridge. “Our entire administration staff, dispatch, safety, and maintenance are located at this facility.” Juan Rafael said, “It also includes an in-house trailer repair shop and truck wash.”

To top it off, he created warehousing space through the sister company Grande Produce, strategically located next to Cano & Sons Trucking. “We offer materials handling and storage services that are PrimusGFS certified,” he said. (Primus GFS is a Global Food Safety Initiative (GFSI) audit Certification Program recognized in 22 countries.)

Juan Rafael and Sara have built trust with their business. Even twenty years later, they still work with some of the same clients he used to serve when a solo trucker working six days a week.

“In this kind of business, there are no holidays.” He said, “There’s no Christmas, no birthdays, no New Year celebrations. When you and the client have a need, that obliges you not to have the same benefits as anyone else. In the end, it’s all about putting food on our family’s plate.”

According to Juan Rafael, in the trucking industry, “Unfortunately or fortunately, the driver’s job is a profession that pays well, but it comes with sacrifices.” He continued, “Well paid, but most of the time, you are away from home.” He said, “As a driver, it is important to value the time spent at home to make things worthwhile.”

Concerning how his business is doing during the pandemic, he said that the hauling of perishables and their immediate delivery has made his business stay afloat. “We’re not in zeroes or having a bad streak. We dohave low percentages, but that will change.” He said, “That is part of what we accomplished.”

Juan Rafael is thankful to his wife Sara, for having the patience and understanding during his home absence. He said that a business is very demanding if you choose to keep moving forward.

Managing a fleet of 150 trucks is not like a walk in the park. Fortunately, today, he said there are technology systems that help with everything from loading, to departing, and delivering a load efficiently.

“You no longer work manually, today those trucks are connected to their diesel cards, traffic, and much more.” He said, “The drivers need to input all that information because it also goes to payrolls, finances, accountability, and everything comes out of a system.” That system also tracks drivers’ hours at the wheel. The industry is now regulated to avoid a driver overworking behind the wheel.

Sara remembers those days when she was both a mom and a dad. She emphasized that when she needed to call Juan Rafael, he always was there for her. “I knew he was busy, and I didn’t want to take too much of his concentration while driving, but he always called me.”

Sara points out that they were carefully managing their money; they never overdid it. “The beginning of a business is crushing. I never wasted money; I took care of my budget,” she said.

“I’d like to add that my oldest son, Juan Rafael, Jr. manages the maintenance shop. We hope he’ll take over one day.”

Sara was born in Champaign, Illinois. When she was in the 9th grade, her parents sent her to Cadereyta to help her grandmother who was ill. It was there that she met Juan, and a few years later they were married.

When she returned to the states, she received her GED in McAllen, Texas. That’s when everything started along with the beginning of their company.

The building of Cano & Sons Trucking has been a monumental task. Juan Rafael and Sara are two unique individuals that have proven that the American Dream is indeed alive and well if you have the perseverance and vision to achieve it.  To learn more, you can visit their\ website www.canoandsonstrucking.com.

City of McAllen officials, in conjunction with the McAllen Independent School District and Hidalgo County, will be hosting a COVID-19 vaccine clinic tomorrow, Friday, January 22, 2021 at the McAllen Convention Center, 700 Convention Center Boulevard, starting at 8:00 a.m. for all pre-registered individuals in Tier 1A and Tier 1B.
Read more

The Good Deed from Great Hearts

The Ramos, a family of nine, lost their home to fire before Christmas. It was indeed a sad and devastating tragedy.
Read more