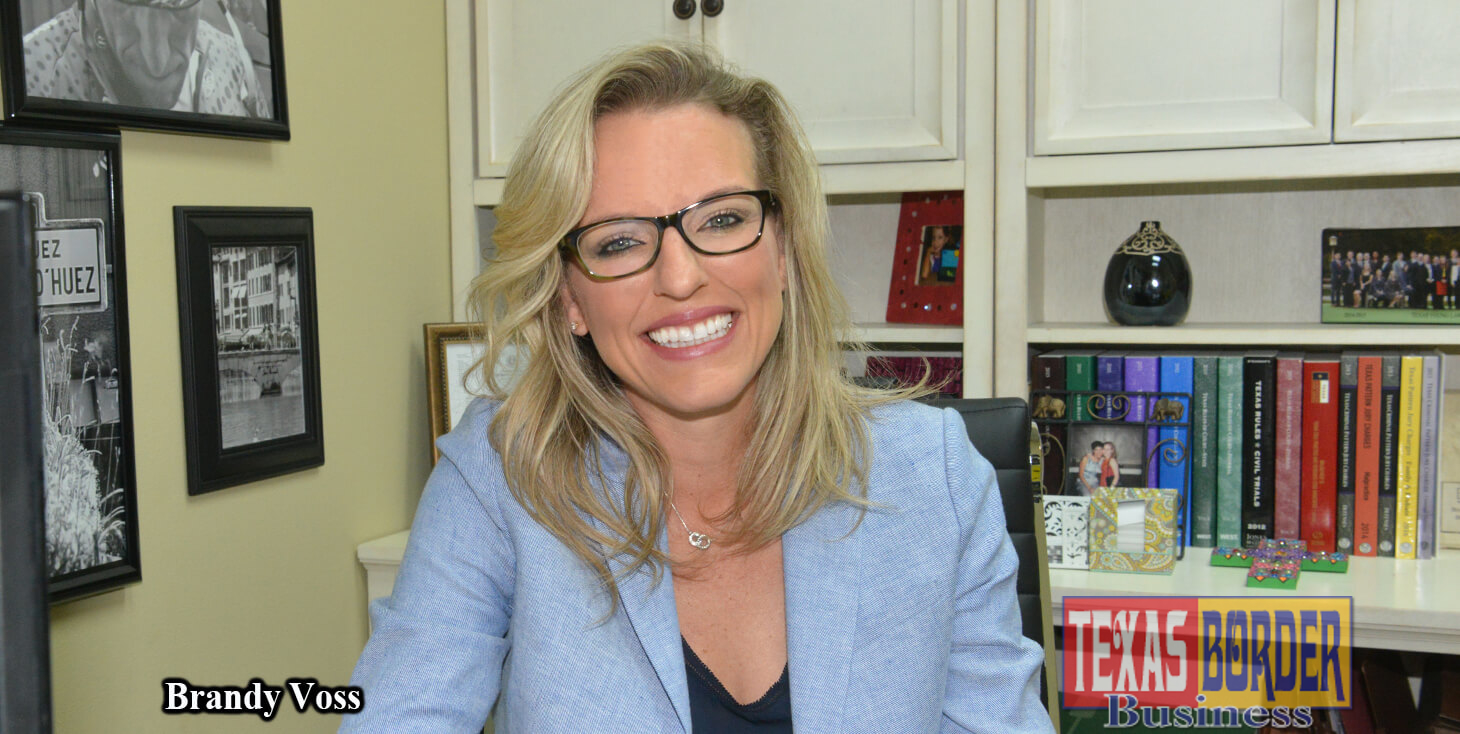 June 5, 2019 – Surrounded by friends and family, Brandy Voss announced that she was running for Texas Supreme Court Place 7. Friends who support her did not have any problem contributing to her campaign. They are eager to see a change in leadership at the state level. This election will take place on March 3, 2020, during the Super Tuesday Primary.

Brandy grew up in Conroe and Sugar Land, Texas outside of Houston. She went to college at Texas A&M University, earning a degree in anthropology, and graduated in 2002 from Baylor Law School.

She worked at the Texas Supreme Court for Chief Justice Tom Phillips for a year and enjoyed the experience. From there, she went to Dallas and took a job with the law firm of Jenkens & Gilchrist, practicing appellate law.

In Dallas, she got married and had Ella, her daughter. She remembers that she had no family nearby, and it was difficult without that support. “My husband at the time had his family in the Valley, so we moved here 15 years ago.”

The exciting part is that she walked into the head of Jenkens & Gilchrist’s litigation section’s office and just asked him, “We’re going to move to McAllen. Can I continue to work?” And he looked at her for a second and said, “Sure,” and that was it.

Brandy said that everything went well for a while until the firm broke up. Fortunately for her, around that time, Gina Benavides had just been elected to the 13th Court of Appeals and was hiring staff. Brandy became her senior staff attorney and worked for her for four years.

Working at the 13th Court of Appeals, she assisted with the writing of hundreds of appellate opinions. She told Texas Border Business that she would have stayed forever with Justice Benavides, but she ended up getting divorced and decided to go into private practice. “I joined a firm called Smith Law Group, all appellate lawyers, and did that for several years. And in 2016, I started my own firm,” she said.

At the campaign announcement event, attorney Ray Thomas was designated to speak about Brandy, and introduce her. “I can say I’ve known Brandy for all of her professional career, and I’m probably one of the few that have known her in different professional capacities.”

He went on to say, “It is amazing how she can turn out a great product and do it so quickly and efficiently. I use appellate lawyers a lot, and she is just absolutely one of the best I’ve ever come across. Her work ethic—it’s hard to find. She puts in the hours with a passion for the law. I mean, she’s a true legal genius, and we’re very blessed to have her here.”

Thomas has been up against Brandy in cases. He said, “When I realized—and it didn’t take long—that I couldn’t beat her, then I had to get her on board.” He said, “She’s my go-to person on any serious appeals, and the results have been fantastic. She instills confidence for my clients, and she also gets excellent results for them.”

Brandy has been board certified in civil appellate law by the Texas Board of legal specialization since 2009; that’s 10 years.

Thomas also added, “When I heard she was going to run for Supreme Court, I was like, “Wow, really?” I mean, on the one hand selfishly disappointed because if she wins, then I’m going to lose a great right arm. But great forthe community, it’s going to be fantastic to have her on our Texas Supreme Court.”

Gilberto Hinojosa thanked Brandy for stepping up. He said that a few years ago, he called Justice Dori Contreras and asked her, “Would you be interested in running for the Supreme Court?” He admitted, “The odds,of her winning or any Democrat statewide, were slim. But she stepped up, and she ran, and she ran a hard race.”

He also said that the same happened with Gina Benavides, but before both of them, Justice Linda Yañez stepped up and ran during a difficult time.

Hinojosa made his point that if you want to make sure that Democrats have an opportunity to elect someone from the Rio Grande Valley who’s willing to step up like Brandy is, now’s the time. “It is time because that’s the environment that we have in the State of Texas. There will be more money pumped in nationally into this state by Democratic institutions like the Democratic Congressional Campaign Committee and the Democratic Senate Campaign Committee than you’ve ever seen in the history of the State of Texas.”

If what Hinojosa is saying is true, it will be a lot of money, because the State of Texas is not the size of New Hampshire. “So, as representative of the Democratic Party, I can’t pick sides. But I believe that somebody that is as experienced as Brandy and as smart as she is… knows that she’s qualified for the position. She will make us proud.”

Brandy said that one of her biggest obstacles was living as a single mom for several years before she married her husband, Mark Voss. “That’s tough. It’s tough raising a kid on your own and trying to have a law practice.” She described balancing everything in her life as similar to a “circus juggler” or a “plate spinner.” She explained that organization and a network of friends is the key. She has built a network of moms and dads that support each other carpooling or hosting overnight sleepovers. “I’m fortunate to have an ex-husband who is very supportive and is very active in our daughter’s life. And we get along perfectly. We always put Ella first.”

Most of her community work has been through the Hidalgo County Bar Association, particularly the women’s bar section, which she co-founded with a few other women lawyers. She has also worked with the Make-a-Wish Foundation and the Girl Scouts, where she serves as a troop leader. Right now, she has her eyes set on the Supreme Court position as the next step in serving her community.

When asked what the best way isto inspire others, especially young people, she said, “Well, I think you always have to lead by example, and you know, I am trying to do that.”

And when asked what advice she would give to the younger generation, she answered, “Get off your phones. We spend so much time on our phones and social media. We forget to talk to people, and so that would be my advice.”

Brandy married Mark Voss in 2013. She said, “I have my daughter, Ella, from a prior marriage, and Mark has two older boys, Glendon and Dillon. Glendon has a little girl named Lexi, who is our granddaughter.” Although she does not have much free time these days—she listed sleeping as a hobby!She recently started fly fishing and claims she is “hooked.”

Brandy feels that the current composition of the Texas Supreme Court doesn’t reflect the people of the state of Texas. She said, “We haven’t had someone from the Valley on that court in 20 years.” There are only two women on the nine-person court, and Brandy believes that does not reflect Texas’s demographics. “And there are no Democrats on the court.”

She emphasizes that good opinions and a well-developed law for the state of Texas is needed. “You need diversity on the court—diversity of viewpoints, and geographic, gender, and racial diversity—because all those different viewpoints come together and provide effective debate, which ends up with better law for the people instead of just all the same viewpoint.”

Brandy concluded the interview with this: “In 2020 for the first time in the downballot the judicial races, you will not be able to vote straight ticket. I encourage the public to go out and study the candidates, make an informed choice, and make sure that you vote early.”

American Pickers to Film in Texas

Texas and Mexico’s Oil and Gas Industry gather virtually for the...