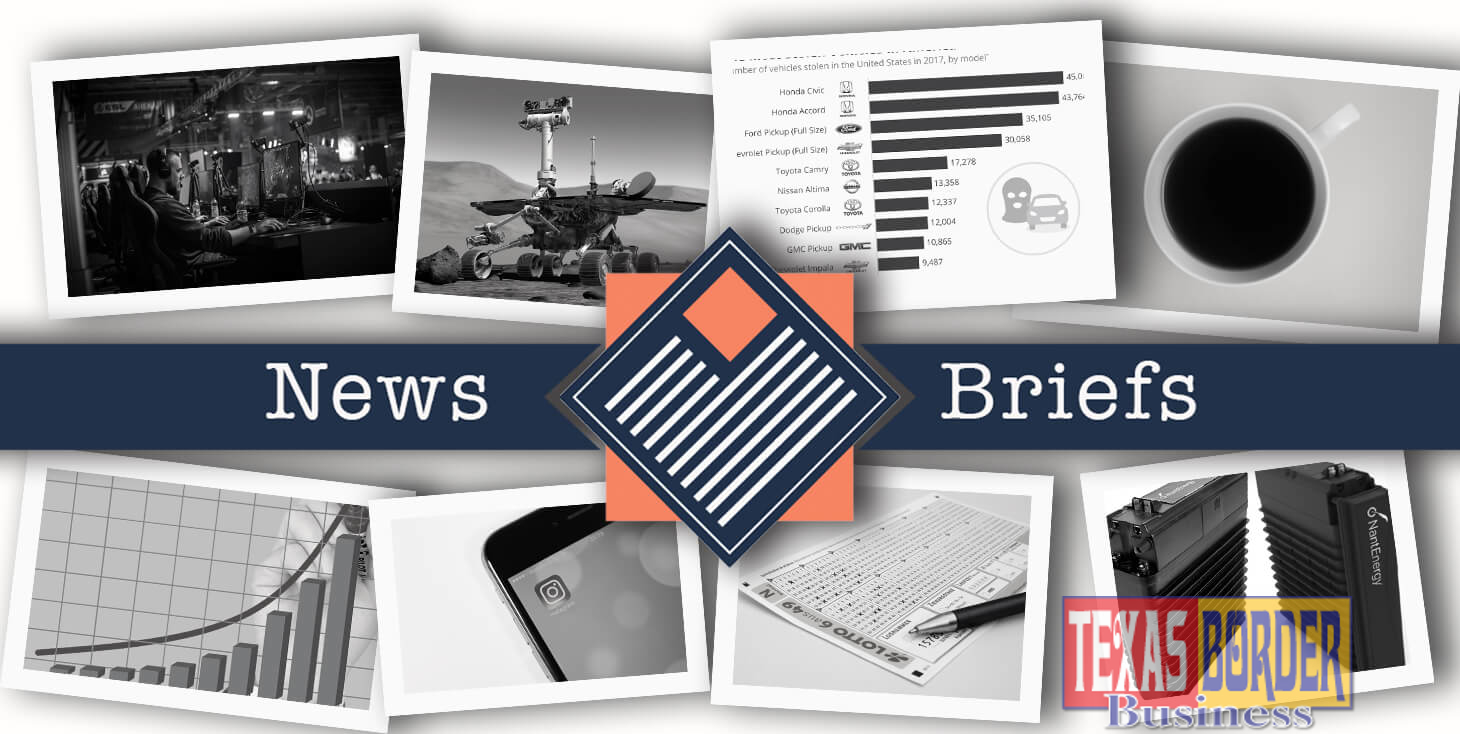 According to investment firm Space Angels, private investors across 120 venture capital firms poured $4 billion into space startups in 2017 —a 12% increase from the previous year. Far from being transient novelties, however, many of these startups are making valuable contributions that will be critical to realizing a multiplanetary future. Source: Forbes.

The Most Stolen Vehicles in America

The National Insurance Crime Bureau (NICB) released its annual Hot Wheels report, listing the 10 most-stolen vehicle models in the United States. Its findings are based on theft data submitted by law enforcement and it determines the make, model and model year most reported stolen in 2017. Like in previous years, Honda has the undesirable reputation as America’s most-stolen make of car. Source: Forbes.

Dunkin’ Drops ‘Donuts’ from Name in Shift to Coffee

Dunkin’ Donuts plans to rebrand itself as “Dunkin’” as part of new CEO Dave Hoffman’s plans to bring beverages and breakfast meals to the forefront of the restaurant chain’s menu. “The new branding conveys the company’s focus on serving great coffee fast, while … retaining its familiar pink and orange colors and iconic font,” the company said. Source: Reuters

The Federal Reserve has modestly raised a key interest rate for the third time this year in response to a strong U.S. economy and signaled that it foresees another rate hike before the year ends. The Fed lifted its short-term rate — a benchmark for many consumer and business loans — by a quarter-point to a range of 2 percent to 2.25 percent. It was its eighth hike since late 2015, and the Fed indicated that it expects to continue gradual increases. Source: AP News

Kevin Systrom and Mike Krieger, co-founders of Instagram, have announced their plan to leave the company that produces the popular photo-sharing application. “We’re planning on taking some time off to explore our curiosity and creativity again,” Systrom said in a statement on the company’s website. “Building new things requires that we step back, understand what inspires us and match that with what the world needs; that’s what we plan to do.” Source: NPR

Remote villages in Africa and Asia are receiving electricity using a little-known type of technology: zinc-air batteries. California-based NantEnergy said Wednesday it has created a rechargeable zinc-air battery storage system that can provide power at a lower cost than lithium-ion systems. The technology has been deployed in more than 110 villages serving 200,000 people who have no other access to electricity in their communities, said NantEnergy chairman Patrick Soon-Shiong. Source: AP News

The winning numbers have been drawn for the record $1.6 billion Mega Millions lottery jackpot, but it isn’t immediately clear if there’s a winner. The estimated jackpot is the largest lottery prize ever. The jackpot has been growing since July when a group of California office workers won $543 million. It costs $2 to play the game, but the odds of matching all six numbers and taking home the grand prize is a dismal 1 in 302.5 million. Source: Bloomberg

Epic Games, creator of popular online video game “Fortnite”, said on Friday, October 26, it received $1.25 billion in funding from investors, including KKR & Co Inc (KKR.N), Iconiq Capital and Smash Ventures. “Fortnite,” a sort of hybrid of “The Hunger Games” and “Minecraft,” drops 100 people onto an island to fight each other for survival. Source: AP News

Criminal Aliens Continue to Cross in the RGV